Last week my hospital consultant told me she was wondering if I was now too stable to be on the transplant list. She tentatively suggested I be taken off it for the time being. Suspended for a while. Put on pause until I start to deteriorate again. I was shocked. Gobsmacked. Maybe I should have been jumping for joy, impressed by my wonderful body for beating the odds and amazingly not declining further. Maybe I should have been relieved that this stability was now making them doubt the urgency with which I need new lungs. But actually I just felt panic. Frightened and worried, and strangely disappointed. And oh so very confused… I’m not sure what to do for the best. 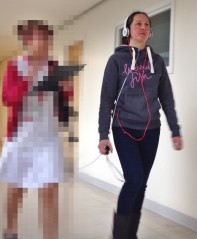 Trying to breathe and walk…

We’d just celebrated my amazing six minute walk test result (460m the furthest ever 🙂 ), discussed how well my wonderful heart is coping, marvelled at the way I was randomly feeling stronger again after my four month deterioration over the summer… and then she dropped her bombshell. And yes it was a bombshell. I wasn’t expecting it at all. I wasn’t expecting anything controversial so didn’t have Phil with me to cushion the blow. We didn’t even have time to discuss it in detail. It was the end of the appointment, the last topic on the agenda. Stable and stability and immune-suppressant holding effects were mentioned. But I was too surprised to think of the many questions that have since rolled repeatedly through my mind. As she concluded our brief conversation; about who we needed to discuss it with, what other tests I needed to have done… I just sat there conversing with her but with my mind in a different place. Yo-yo-ing from happy to sad to scared, to happy to sad to scared. She asked me my opinion, but I didn’t know. I had no idea. It was only when I later relayed it to Phil, that I realised the gravity of the conversation, and began puzzling over her thinking. So I don’t know why she has now started to ponder this idea, why she thinks this will be the best action for me, why she is wondering this after everything that has been discussed before. Thus her previous words just continue to loop in a confusing contradictory manner… “You’ll never be taken off the list”… “We might suspend you from the list”… “You’ll never be taken off the list”… “We might suspend you from the list”.

When I got home, a tiny part of me did feel excited and amazed and thankful and celebratory. My amazing body is beating the odds! I started dreaming of the extra months, or maybe year, that might now be added to my life. Having a transplant will be the start of a ticking clock counting downwards to the end… so any chance to delay that is great. Postponing might mean more time with Phil and Mum and nephews and friends. Maybe an extra Christmas or birthday or holiday. I allowed myself time to bask in dreams of miracles. Will I improve further? Will I remain stable long enough to find a cure for PH? A tiny part of me appreciates why postponing having a transplant might be a good thing.

But in reality, as much as I tried to think positively, I instead just felt shivers of fear. I’m scared. Frightened that suspension will decrease my chance of survival. I’ve been waiting by the phone for 18 months now, with no call at all. Therefore, although I know it will only be a temporary halt until I next decline… Although I know it’s not a no forever, just a no for now… I’m worried that by the time I am reinstated on the transplant list again, it will be too late.  Out of time.  Window of opportunity closed.  If they’ve been unable to match me in the last nineteen months, then they cannot confidently assure me that a suitable donor will be located in a much shorter time frame. When I’m declining so rapidly that I only have mere months left.  Thus by agreeing to halt now, will I decrease my chance of getting new lungs in time?  Will I increase the likelihood of being in the 25% who die waiting?  Furthermore, won’t I be decreasing my chances of surviving the operation, by -in effect- agreeing to be wheeled into the operating theatre in a much weakened and more poorly state?  So many worries trolling my head.

And I am oh so very confused.  Baffled.  Completely bewildered at my doctors thinking. I’ve spent the last 23 months being repeatedly told that PVOD is awful. I’ve spent the last 23 months being reminded through letters and talks that I’m going to dramatically decline at some point soon. I’ve spent the last 23 months being told that due to the unpredictability of my condition, and short prognosis, I will never be allowed off the transplant list even if my clinical scores improve.  Yet the very same consultant who first told me about PVOD and filled my head with doomed thoughts, is now pondering having me temporarily removed. It’s so difficult to understand. Puzzling to try and comprehend her reasoning. What has changed from the conversations of before? Nothing. Literally nothing. I am still the same as when I signed on the dotted line. I still have PVOD. Awaiting the dramatic decline. I still have PVOD. No further options. I still have PVOD. Poor prognosis. What has changed? I am still the same me with 30% lung function. The same me that uses oxygen and a scooter. The same Sarah that sometimes needs help dressing, or carrying up the stairs, or cooking food for. The same Sarah that is sick after every friends’ visit, spends days on the sofa, has months of unexplained increased symptoms. No better, no worse, I’m the same. It’s all so very confusing.

Later, after the shock and the worry and the confusion had abated… after Phil and I had conversed and discussed and debated… after I’d gone to bed with my meditation CD… I suddenly remembered my mountain. Gut-wrenching disappointment. Tears. During the last 19 months, whenever I’ve feared the operation, feared the recovery, feared going ahead… I’ve dreamed of a future walk in the hills with Phil and Lottie. A picnic overlooking the view from a high summit- my reward for being brave. That dream has sustained me, kept me positive, determined to go through with it all. As each month has passed on the list, I’ve felt reassuringly closer to my mountain walk. So suspending me, takes away my dream for a while. Heartbreaking. I feel like I was offered the world, everything I longed for… and soon. The doctors enticed me and excited me and allowed me to dream that a wonderful life post-transplant was nearing. They watched me lap it up, salivate at the treats on offer… before now cruelly threatening to take it away. Yes it’s temporary- I will hopefully still get my mountain one day. But I wanted -really wanted- that summit and picnic and flask of tea this summer.

I’m down at the Brompton hospital next week. A few days of tests, and a chance to talk through this latest twist on the transplant roller-coaster. So will I be kept on the transplant list, or will I be suspended for a while? I really don’t know which way this one is going to go. 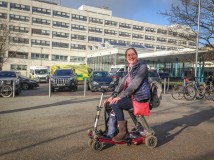 One thought on “Am I Going To Be Suspended From The Transplant List?”