I don’t know all of the words to ‘Auld Lang Syne’.  Apparently only 3% of the population do.  Every new year, when the clock strikes twelve and the singing of the traditional song begins, I repeat the same lines for every verse… and vow to learn it properly in the next twelve months.  Lalalala-ing to the lyrics is the one part of our Hogmanay celebration that hasn’t changed since I’ve became ill.

I’ve always loved celebrating the New Year.  As children, we’d dress as cowboys to attend the village barn dance, before singing karaoke and eating Sara-Lee gateaux into the early hours.  Then as late teenagers, I’d welcome in the new year with my lovely gang, sniffing cider at a house party… or later paying the extortionate hyper-inflated fees to enter a night club.

But my favourite New Year celebrations, were in the years after leaving university.  We’d meet up in a basic bunkhouse in the mountains, with a large group from our old university canoe club.  A long weekend of walking and canoeing and drinking and games.  Although the hardcore (including Phil) would climb snow-peaked mountains in the daytime, I’d generally opt for a shorter hill walk that ended at a cosy tea room.  I have so many happy memories of these times.  Skidding on ice in the mountains, having snowball fights, climbing on each other to make pyramids.  Repeated games of Articulate, New Years Sunday Roasts, the ‘paddle game’.  It was actually these get-togethers that allowed me to monitor my deterioration with Pulmonary Hypertension.  In my mid- 20s I could keep up with my friends when walking in the mountains, but as the years passed I struggled… until eventually I was slower than everyone, even on the downhill.  When my university mates started welcoming little ones in to their brood, it was no longer practical to have the big group get togethers of before.  So our celebrations became smaller and warmer and involved houses with real beds! 😛

At the back (red bag) again! 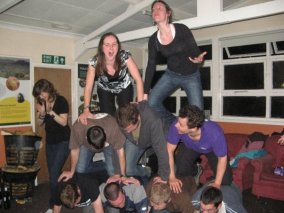 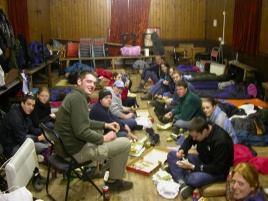 Mattresses in an old bunkhouse!

Since getting ill with Pulmonary Hypertension, I’ve found New Years Eve difficult to celebrate.  I still love the nostalgia of saying goodbye to the old year, I still love the excitement of thinking ahead to the next.  I still love the catching up and having fun and clock watching and toasting with champagne.  But the practicalities of celebrating as an ill person are difficult!  I can’t do noise and busyness and activity and too much excitement.  I can’t do long tiring weekends or action packed day trips or energetic game marathons or staying awake until midnight.  And I especially can’t do these things, mere days after celebrating Christmas, when I’m already completely exhausted!  Every year, I moan that two such fun occasions are only a few days apart, and whine that I want at least a fortnight between them.  However, as neither festival is likely to change date anytime soon ( 😉 )… we have instead adapted our celebrations so we can still celebrate both.  And thankfully we have a small group of wonderful friends, who happily go along with my need for altered plans, thus allowing me to still be able to join in with them.

So New Years Eve is now a wonderful one-night-only house party.  To allow me to celebrate both Christmas and New Year, the former needs to be finished by the 27th December, to allow rest and recuperation before the next party.  Despite spending the week between both festivities lying on the sofa, I have learnt that I am never completely recovered, and always fatigued still, by the 31st.  Consequently Phil and I shorten our attendance at the get together to less than 24 hours.  We arrive in the early evening of the big night, and leave the next morning.  By staying in and having a house party, we can be in the warmth, resting on comfy sofas all night.  Games are carefully selected so they don’t involve too much talking or any movement.  And by sleeping over at our friends’ house, I can sneak off to bed early, if I can’t stay awake in time to hear the chimes!

This year it was our turn to host the annual celebration.  Two new babies had joined our group in 2017, but amazingly we still just about managed to squeeze everyone into our living room!  Phil treated us to baked Camembert, homemade bread, and a salmon feast; and Madi came to the rescue by baking chocolate brownies for pudding (I was too fatigued to cook).  We laughed so much at ‘Exploding Kittens’ (it’s a game 😛 ), that I had to wear my oxygen!  When the clock struck twelve we toasted with fizz, sang and bopped to Auld Lang Syne, and watched the London fireworks on TV.  And amazingly I not only managed to stay awake to enjoy the whole celebration… but I didn’t bed down until 2am!  The latest I’ve been awake in many many a year!  The next day we all lazed around in our PJs eating bacon bagels, whilst the little ones kept us entertained.  Though when everyone left, I immediately returned to bed for the rest of the day.  Completely and utterly exhausted… but with a smile on my face.  It had been a perfect start to 2018. 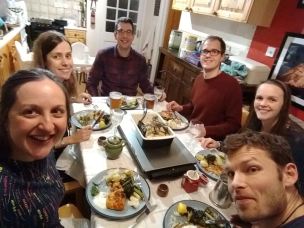 I’ve just been learning the second verse of Auld Lang Syne ready for next year.  I wonder if I’ll be singing about “your pint cup” with a powerful new pair of lungs.  I look forward to seeing what 2018 has in store.