In the beginning, Phil and I were both convinced that the call would come in the first few weeks.  I’d been rushed through transplant assessment, where I’d been frequently reminded of how urgently I needed new lungs.  I had a common blood group that could accept organs from a large percentage of the population.  And I had no unusual antibody or immune system results which would make me more difficult to match.  Furthermore, a weird dream a few years earlier had me convinced that I was going to have the operation at my then age.  Convinced.  Way before transplant was ever discussed, I dreamed that I would have one at age 35.  A white witch prediction.  I was placed on the list a mere eight weeks before my 36th birthday, so was adamant that this was my fate.  I told everyone, I was so certain.

Consequently, the first month on the list was stressful, as we both urgently prepared and organised our lives for when my call came.  Packages were delivered daily, as I frantically bought the contents of my hospital bag.  I wanted everything to be brand spanking new -pyjamas, toiletries, slippers- a bit of luxury for after the operation.  It was packed into a suitcase and stored under our bed- ready to be retrieved after the call.  Likewise a holiday bag for Lottie the dog was hastily prepared: everything for her time staying with the neighbours.  I speedily wrote out instructions and notes for my family: phone numbers, hotel information, predicted timeline of my recovery.  Phil quickly made plans at work.  Constantly worried that my call would come before we were completely organised, we were relieved when the jobs were ticked off.  And then we metaphorically sat and waited.  And waited.

For the first two months, I thought about it a lot.  At least once every waking hour.  Every time the phone rang, my heart jumped, my stomach dropped, and I answered it with a nervous squeak.  Every time we went on a dog walk, I would anxiously check my intermittent phone signal, hurrying home to press 1471 on the landline if we’d been out of mobile reception for too long.  Every day I awoke and wondered if today would be the day.  I answered the phone every time it rang- I didn’t miss it once.  Even when asleep or poorly, even when in the furthest corner of the garden or house, even when cooking or on the toilet… I’d always rush to answer it.  I was expecting that important call every single day.

In the beginning it felt surreal to be on the transplant list.  Truly surreal.  I’d been aware of organ donation from a very young age; had always carried a card in my childhood purse, and frequently discussed it as a family.  Now thirty years later, it felt strange that those long-ago conversations about poorly people were relevant to me.  In the beginning I’d repeatedly say “I’m on the transplant list” to myself.  Time after time.  To convince myself that it was real, to begin to process what was happening.  In the beginning I’d read heart-wrenching stories about poorly children needing liver transplants, or dying adults desperately awaiting heart transplants- and be sad for them.  Then two seconds later, my stomach would drop as I’d remember that I too was one of them.  Little me was also waiting, also dying.  In the beginning, every time I read a statistic about the transplant list on Facebook, I would remember with a jolt that those statistics were now relevant to me.  I was now one of the 360 people waiting for life saving new lungs.  It took a while to get used to being on the list.  It took a while before it didn’t seem scary or surreal or shocking.  It took a while before I associated the transplant world with myself.  It took a few months.

Time passed and my call didn’t come in the first couple of months as we’d assumed.  When my 36th birthday came and went, I was actually quite gutted.  I shed tears that it hadn’t worked out the way I’d predicted.  My white witch hunch had been wrong.  A couple more times, I was convinced it was going to happen really soon – another sixth sense- but again this never happened.  I’ve stopped second guessing now!

So as the months have passed, normality has almost returned.  The most significant change has been my new restriction from venturing more than three hours from Harefield hospital.  No more holidays abroad, or visits to Phil’s family on the Isle Of Man, or trips further north than Birmingham.  Aside from that, very little in my life has had to change by going on the list.  A packed suitcase under the bed.  Always carrying my mobile phone.  Another hospital keeping an eye on me.  Emailing the doctor of my new location if I drive more than an hour from home.  So my old life has mostly carried on as before.  Of course, I still think about it at some point every day.  But no longer every hour.  And no longer with the same urgency, the same expectation, the same nervousness, the same awe.  Now it has become a part of life.  Nowadays I rarely think of it when the phone rings.  Although I still try and answer every call, I no longer attempt to breathlessly run in from the garden, or jump up when I’ve been sleeping.  I no longer panic when I’m out of signal, or have a missed call, or Phil’s forgotten his phone.  Normality has returned and in a way I often forget I’m on the list.

As I’ve thankfully been well for most of the year, waiting has been easy.  I’m not awaking each morning hoping it is today.  I’m not praying it comes soon.  I’m not desperate.  I’m completely at ease with having not receiving the call yet.  Only during my unexplained poorly weeks, when I’m concerned I’ll deteriorate before getting my chance, do I wish for the phone to ring.  But then with wellness, I return to plodding along happily, waiting patiently.  In fact, in some ways I am pleased it has not yet happened.  I’ve been given an extra year with my own lungs.  The original team still going strong, still defying the odds.  I’ve not missed any of the fun or important events planned in my diary.  (Naughtily, I sometimes declare “please don’t be Harefield” when the landline rings on the eve of something I’ve been looking forward to).  And I’ve become calmer and less stressed thinking about the operation.  Yes I am still nervous, but not to the extent of a year ago.  I’ve had twelve additional months to mentally prepare.  I’ve had twelve additional months to be at peace with transplant.

Although the mean waiting time for lungs at Harefield is 18 months, the distribution is equally spread from day 1 to day 1000 on the list.  I have the same chance of getting new lungs today, as I have getting them tomorrow.  Everyday is a fresh -completely equal- chance to get the call.  I’ve not been called because a donor has not matched me.  Same blood group, same size, same antibodies, died in the south.  (Or possibly, a potential match has instead been allocated to a more ill member).  I have an 80% chance of getting new lungs in time.  My 5’2″ height does reduce the number of people I can receive from (average sized adult lungs would not fit in my chest), but my common blood type works in my favour.  I’d have greater odds if I was a blood group A man (100%), and lower odds if a blood group O small lady (40%).  I’m happy with my chances.

So I’ve been waiting for thirteen months.  Thirteen -unbelievably quick, speeding by- months.  I expect the wait to now get mentally more difficult as time passes.  But there is absolutely nothing I can do except hope and pray, and hope and pray.  And continue to always answer my phone! 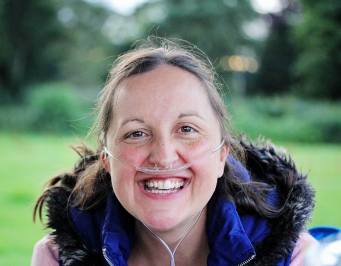 One thought on “One Year On The Transplant List”