I used to assume that anyone who needed a new organ would be placed on the organ transplant waiting list.  However, since entering the world of ill heath, I’ve sadly learnt that there is no guarantee that anyone will be accepted.  Through transplant groups on facebook, I’ve observed daily, distraught people from around the globe, who have been turned down.  Their one chance at extending their life taken away.

In the UK, as we have an opt-in system for organ donation, donor organs are in very short supply.  Simpy put-there are nowhere near enough organs for everyone who needs one.  Therefore only some of the people who require them will be given the chance to go on the waiting list.  For everyone else, that is it.  Every week transplant doctors have to make the very difficult decisions about who is going to be allowed the chance to go on the waiting list, and who is not.  They play God.  Principally the decision is based upon who is most likely to survive the operation and live afterwards.  Therefore to be considered to go on the waiting list, every part of your body is assessed as you undergo a multitude of tests and interviews.  Some of the reasons for being turned down are more obvious (age, weight, other medical conditions).  However some are invisible and so rejection can come completely out of the blue (antibodies, tissue type).  And sometimes through the process of the thorough body check, currently unknown illnesses are found (kidney failure, cancer) that prevent you going on the list.  Therefore being assessed for transplant is an incredibly scary process.  I only have one egg left in my basket, one option left; and so I am just hoping that it won’t be taken away from me.  Yet I genuinely don’t know what their decision will be.

I was surprisingly calm and positive in the month between the transplant assessments.  I decided to just savour the happiness and relief of passing the first stage: there was little point in worrying about the final assessment as there was nothing I could do to influence the outcome.  Well aside from a quick trip to the dentist, to get my teeth and oral health signed off for the operation!  In the proceeding days, we distracted ourselves by taking our campervan out on its maiden overnight stay.  Then the day before was spent with my best friend who needed my support, so consequently I didn’t get much chance to think about it all.  In fact, I’d been distracting myself so much, that I’d forgotten to read the book they gave me all about it!  So I retired to bed early with it the night before, learning about the operation and writing down lots of questions.

It was an intensive two days.  Luckily the enormous list of assessments to be completed was soon whittled down to a more manageable amount, as I had done a lot of tests recently at the Brompton that did not need repeating.  My bed on the ward at Harefield had been cancelled due to an emergency, however that meant we got to escape the hospital in the evening as we stayed with our friends down the road.  We took The Bumblebee (our campervan) to chill out in and lie down in between tests.  We were able to cook food in it, and sunbathe on our picnic chairs, pretending we were somewhere else! 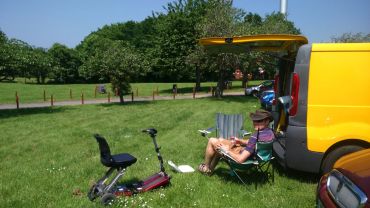 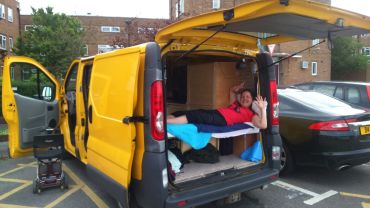 Again, I had an enormous amount of blood taken, also the normal ECGs, swabs, and basic body recordings.  I’d had to collect my urine over 24 hours before I came.  When they first handed me the enormous pot, I laughed at the volume they thought I would produce.  It seems they were correct- I’d never measured it before, but actually we wee quite a bit!  Plus I’m on diuretics, so that probably doesn’t help!  I had my arterial blood gases checked for the first time.  I’d managed to astutely avoid this test until now, as it is famed for being painful.  Basically the doctor sticks a needle in to the artery in the wrist to extract the blood, then the oxygen and carbon dioxide levels in it are accurately measured.  Thankfully it was not as bad as I was expecting, but it ached a lot afterwards and left me with an impressive black bruise! 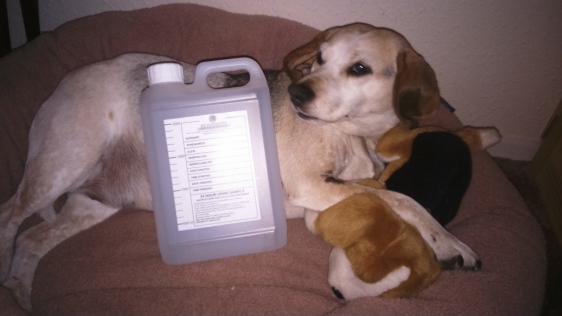 Lottie with the wee bottle! See how big it is! 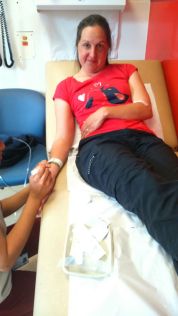 On the second day I had to go all the way to the Brompton hospital to have a DEXA scan.  It’s a pity we didn’t know I needed this test last week when I was there, as this would have saved the NHS the expense of an ambulance taking me there and back!  However Phil enjoyed a pint in the pub in the sun whilst he was waiting for me to do the journey!  The scan was incredibly quick, just lying down with my feet in a strange position so they could measure my bone density and see if I had any osteoporosis in my spine or hips caused by the steroids.

The longest test was the MRI.  I’d been dreading this, having heard many horror stories about claustrophobia from others.  Beforehand, I kept thinking about that episode of “House” where a prisoner goes in to the MRI machine and is sucked to the roof as his tattoos contain metal.  I kept checking to see if I had any secret metal in me that I’d forgotten about!  I was shaking like a leaf despite the dose of diazepam given, but luckily the doctors were used to panicking patients, and so were wonderfully calm and reassuring.  Weirdly they had a lot of trouble inserting a cannula in to my arm (for contrast dye) and had to try in four different places- including the very painful back of my wrist- before any success!  When they showed me the machine, I was reassured that the tunnel looked quite large, however I didn’t take in to account that the platform you lie on is then elevated until you are mere centimetres from the top of the tunnel!  Scary!  Even scarier, a weight is placed on your chest, your hands are held down by your sides…  and then the platform starts moving you further in to the tunnel, head first!  I did panic at this point and asked to be taken out again!  Fortunately, they then gave me a super pair of magic glasses (designed for children!) that had mirrors in them so reflect the length of the tunnel instead of allowing you to see only the top of it.  They were amazing, and I instantly felt relaxed and was able to do all the whole procedure.  I was in there for over an hour; holding my breath repeatedly, and lying very still whilst scans were taken of my heart.  The machine was incredibly loud and continually made beeping sounds, but I was given earphones so it was tolerable.  My wonderful husband, knowing I was nervous, had been allowed to come in with me.  He spent the whole session holding my leg ready to yank me out if I panicked, which was very reassuring.  But actually I was completely fine once I was in the tunnel.  So my recommendations for MRIs are diazepam, magic glasses and a husband holding your leg!  Afterwards the doctor showed us the 3d images that had been taken- they were incredible, so detailed!

Once again all of the staff were amazingly friendly, and I loved how they remembered me.  I got the chance to meet a lovely facebook friend Vanessa, who used to have PH until she had her lung transplant at Harefield a couple of years ago.  She was the first person to have a pioneering treatment prior to her transplant (novalung), something that has since been discussed with me.  It was really scary to hear how ill she was in hospital, but it was also very reassuring, as she is so well now and gave such high praise to the hospital.

I had a few meetings with different nurses and doctors.  One with the support nurse was quite surreal, as we ended up discussing issues around end-of-life; donating bodies to research and morphine at home!  Although it felt scary and odd to be discussing this, it was probably best to start those conversations now when I’m feeling quite well.  I also got to meet the other transplant doctor, Dr Reed, who will be the one in charge of me, as she specialises in the PH patients.  To be honest, I left her office feeling quite shell-shocked and terrified.  Apparently PH patients are the most high-risk of the transplantees as our enlarged hearts can easily damage our new lungs.  We briefly discussed how I would probably therefore be very ill and need to spend a long time in ICU after the operation, whilst this was being managed.  I was also shocked that I’d probably be kept in hospital for 3 or 4 months afterwards, I was hoping it would be less than half of that.  I left the hospital with new worries about the operation and outcome, and many more questions!

So now all of the tests have been ticked off, all of the assessments have been completed, all of the interviews have been conducted.  The final part of the process is the MDT meeting today.  All of the surgeons, doctors and nurses involved in my case will review the results, and see if they believe I match the criteria at Harefield for a lung transplant.  The nurse will then ring and let me know at the start of next week.  So now there is nothing more I can do except wait… and hope.  I can feel the tension inside me, and have surprised myself by needing a few relief-inducing crying sessions this week!  I have every finger and toe crossed that they say yes.  The alternative is too scary to think about. 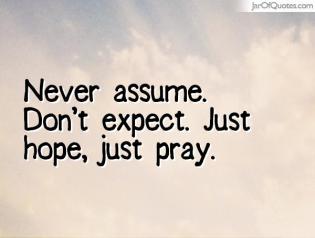 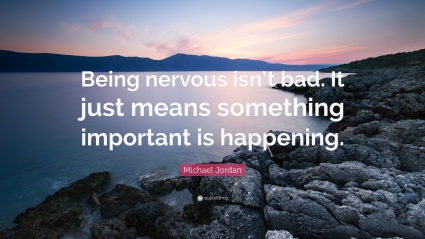 One thought on “Final Transplant Assessment”