It’s a very strange feeling starting the transplant assessment journey.  I feel like my life is in the hands of someone else.  The final answer could be a yes and the potential to save my life, or the final answer could be a no and that’s it, the end.  I’d deliberately not really thought about the implications of it in the proceeding weeks, so the day before my first assessment meeting when I started to process it I was a bag of stressed-out nerves!  I would rather have postponed the appointment, as the whole time that the decision has not been made I still have hope and a chance.  As soon as a decision has been made, then that is it.  And I have to get on with the result.  It terrifies me to think that they’ll say no, so in many ways I’d rather not get my final result.

It was our first time visiting Harefield Hospital.  When I’d initially been told I needed a transplant, my doctor had asked me to pick between being referred to Harefield (in London) or Papworth (in Cambridge).  My immediate reaction was Papworth, I knew people who’d been treated there for a number of PH related procedures including transplant.  But more importantly I’d seen their big duck pond and grounds!  I am a complete country bumpkin.  Every time Phil and I travel to the Brompton in central London, it takes two of us: Phil to drive, and me to navigate and to squeal about the manic drivers around us!  If I was to be recuperating anywhere, I’d rather be surrounded by peace and tranquillity.  However my doctor was very keen for me to go to Harefield, as it is the sister hospital of the Brompton and the two teams work quite closely together.  She showed me that Harefield is not actually in central London, but instead in the outskirts (Hillingdon), and it does indeed have some grounds and countryside.  Don’t worry I didn’t let fields completely sway my view, I had also checked out its credentials!  Harefield performs the most heart or lung transplants in the UK yearly- almost one a week- so I felt reassured that they knew what they were doing.  It is also far more convenient as is only an hour’s drive from our house, and only 5 miles from my best friend’s house!

Luckily it was a beautiful day, the sun was shining on us, and so we instantly got a good feeling for the place.  The original building itself was built 100 years ago, but the transplant reception was all new and shiny!  Over the course of the day I met with the friendly transplant coordinators, who instantly put us as ease and were willing to answer any questions we had about the process.  It was a relief to like, and feel comfortable with, them as they will be our main point of contact throughout the process.  I had an enormous amount of blood taken (18 test tubes)- they must be testing everything possible!  I also had a chest X-Ray, a quick Lung Capacity Test, an ECG and an Echo.  It felt strange to be entering this new world of transplant; as newbees we were lapping up all of the information, keen to learn everything we could about it.  I got the chance to chat with a few other people who were also there for the transplant clinic, but were already on the list.  It turned out to be the hottest day of the year so far, so after many hours of sitting in waiting rooms between tests, we sneaked outside to enjoy some sun, look around the grounds – and ate ice creams!  It was a long long day- we were there for 9 hours, which is especially exhausting when you have an illness! 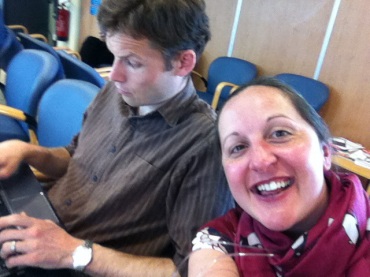 In the waiting room for one of many tests!

Ice creams in the sun!

The final, and most important, meeting of the day was with the transplant doctor, Dr Carby.  Luckily we instantly liked him.  Since the two hospitals’ systems computers are connected, he was able to look over a few of my recent tests results from the Brompton.  We discussed my recent decline, my diagnoses and my current capabilities.  The scariest moment was as he was scanning my results to find out my blood group- my hands were literally shaking.  I’d been told earlier in the day that there are currently quite a lot of people waiting for a transplant who are blood group O, including quite a few who are a similar size to me.  Thus if I was blood group O, then I would have a reduced chance of getting suitable lungs in time.  We were all incredibly relieved to find out that I am blood group A, meaning I have an 80% chance of getting a transplant before I become too ill.  Dr Carby seemed very honest and open, we felt that we could ask him anything about the process.  We discussed the possible causes of death during the operation and in the first year-the odds of surviving this critical period are 87%.  Apparently I have youth and health on my side!  I was really pleased and reassured by these statistics, it was higher than I’d expected.

Finally, much to my enormous relief, Dr Carby reassured me that I seemed like a suitable candidate for transplant, and there was no warning signs flashing to him.  He’d be happy for me to proceed through to the second stage of the assessment process, as long as the final critical blood test results (antibodies and tissues) do not show anything abnormal.  Normally in the second stage, the potential transplant patient is brought in to Harefield for a week to perform further tests.  Currently there is a four month waiting list for this to happen.  However due to my latest diagnosis (PVOD) and my recent dramatic decline, he was very keen to get me in asap.  I met this news with both relief that I was being prioritised, so would hopefully get on the list sooner, and nervousness that I was ill enough to need to be prioritised!  Normally each hospital likes to carry out their own tests, instead of trusting the results from a different hospital.  However as the Brompton is a sister hospital to Harefield, they were happy to accept my recent test results from the Brompton, meaning I wouldn’t need to repeat them, thus saving time. It was therefore decided that I could probably be admitted as just a day patient in the next few weeks to finish off the final assessments needed.

We’d driven into the hospital car park full of sickening nerves and apprehension, but we left full of excitement that this might actually work.  That there might actually be a way to extend my life for a few more years.  That there might actually be a way to give me the chance to live a normal life again for a while.  We allowed ourselves one lovely evening of smiles, excitement and dreams.  Then the next day we put our barriers up once more, and faced the realities head on.  I still need to pass the blood tests (result this week).  I still need to pass the remaining assessments.  I still need the transplant board to make the final approval for me to go on the list.  There are lots of big steps left to go… but I’ve passed the first small one.

Update:  I have passed the critical blood tests.  I am going back in to the Harefield for an overnight stay on 8th June to finish the final assessments and tests.

7 thoughts on “The Start of Transplant Assessment”