Phil and I are country bumpkins.  We live in a beautiful Cotswold village, surrounded by fields and farms and woods and crops.  With a population of just 200, we have more sheep and cow neighbours than human ones.  We love the country: red kites circling our house, the changing harvest over the year, badgers and deer and rabbits in the surrounding fields.  Free time is spent scootering along quiet rural paths with Lottie dog, or caring for the growing plants in our vegetable patch.  Nowadays I rarely need to venture into the towns surrounding us.  Dates are mainly spent drinking and eating in the many wonderful country pubs in neighbouring villages, and the advent of internet shopping ensures I can buy everything from the comfort of my settee.  Yes we have truly become country bumpkins.  And we love it.

However like many people, in our younger years we lived in big cities.  We wined and dined and danced and bopped.  We shopped in stores, drank in bars, ate in restaurants.  For a short while we enjoyed the buzziness and excitement.  However we were always country lovers at heart, so left that life almost a decade ago.  When I got ill, the cities became even less appealing.  Crowded streets made scootering difficult, shops and restaurants were often inaccessible, bars of drunken people were intimidating when you stand out with oxygen or on a scooter.  So visits to the city were cast aside.  However there was one tug, tempting us to visit the capital again.  We were keen to see the musical ‘Les Miserables’, and as they’re not touring, we could only do so by venturing to the heart of England’s theatre central.  I debated whether to book the tickets or not.  Did I want to leave my comfort zone, and confront life as a disabled person in the biggest city of them all?  But I eventually put on my brave face and pressed buy.  So last weekend, us country bumpkins went for a weekend in London.  Our first date in a city since my illness.  And we had a fabulous time.  🙂

When I’d bought the theatre tickets many months ago, the plan had been to drive in to the capital.  A train journey from our local (non-disabled-friendly) station would have cost lots of energy and exhausted me before we’d even arrived.  And we’d have been unable to carry the amount of oxygen I needed on a train, as well as all of our luggage and my scooter.  It seemed easier to drive in.  However Phil hates driving in the scary, busy, beeping, swerving streets of the capital.  So after my recent success of braving the underground, we decided to compromise: driving as far as the city outskirts, and then catching the tube for the final leg.  It worked fine, although Phil had to lift my scooter on to the train a few times, despite us taking a supposedly disabled-friendly route.  And as the nearest accessible station was a mile from our hotel on Leicester Square, we had to scooter through the streets for the last half an hour.

As we couldn’t carry all of my oxygen canisters, we’d arranged for some to be delivered to the hotel.  Randomly, the oxygen delivery man accosted us amongst the crowds of Leicester Square, and asked if the oxygen he was delivering was for me!  Initially I was amazed he’d correctly guessed, only later did I think about it and realise that I never see fellow oxygen users out and about.  The odds were in his favour that he was guessing correctly!

The Premier Inn hotel was wonderfully situated; Chinatown to the north, Leicester Square to the South, and the theatres to the West.  Everything we wanted to see and do was within a ten minute scoot.  Normally we avoid staying in disabled rooms, as all of the gadgets and wires are a reminder that I’m ill.  But on this occasion I was pleased I’d chosen to: the room was massive, and the next day I needed the shower chair when I was exhausted!  Despite being desperate to explore the city, despite only being there for a limited time, despite paying a premium to be situated in the heart of it all… I was weak and tired so spent the afternoon in bed.  Phil had to do the tourist thing alone; returning with Chinese cookies and tales of the sights! 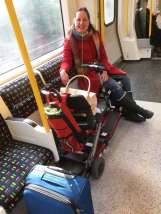 On the tube with Phil 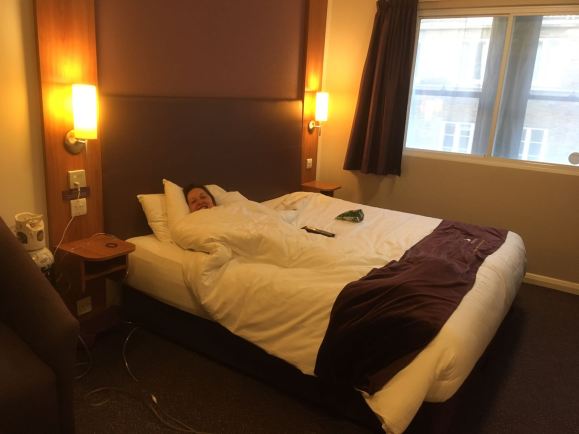 Resting before our night out

When we realised how close we were to Chinatown, our previously booked dinner reservation was cancelled, and instead we found a lovely Chinese restaurant to eat in.  We rarely dress up; so it felt special to do so- although I was a little embarrassed to be wearing a Chinese jacket in a Chinese restaurant!  😛  My scooter was hidden away in the cloakroom, so to the outside world we looked like a ‘normal’ couple.  I cherish those rare occasions when the world doesn’t know I’m ill.  However I did have to lean against the wall, as didn’t have enough strength to sit up unaided on the stools provided.  We dined on prawn and fish dumplings, and a chunky beef goulash.  It was scrumptious. 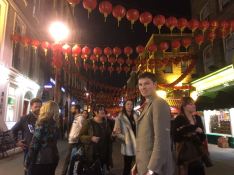 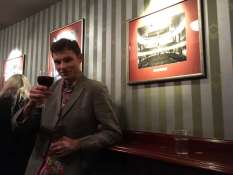 A drink in the theatre bar

The Queens Theatre was opened in 1907: with marble steps throughout; it is completely unsuitable for wheels.  However the theatre staff were wonderfully kind and made it possible for me to attend.  They guiding us around secret accessible routes, and stored and returned my scooter as needed.  Despite the building being largely inaccessible for wheel users, they made it work.  It was a great example of how to think outside the box to make the experience accessible for all.

‘Les Miserables’ was amazing!  We love the songs, and regularly sing along to them on full volume in the car.  We bopped and swayed and were completely engulfed by the music.  I’d once seen the show as a teenager and had been utterly unimpressed.  The cast didn’t act the story, just sang the songs, so I had no idea what was happening.  I’ve since realised that I must have watched a 10th anniversary special concert!  Happily this time they did dramatise the story. The comedy inn keepers stole and conned and tricked and cheated.  Giant moving barricades, pounding loud guns, large flags swaying.  We stomped, cried, sang along, and gave them a standing ovation at the end.  Afterwards we scootered home through the crowded streets, watching London life still bustling at such a late hour. 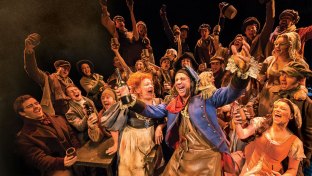 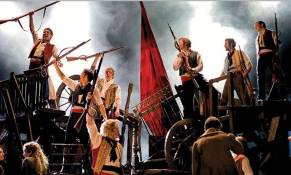 The next day, we explored some of the shops as we made our way back to the tube station. Happily most of the stores were accessible: entrance steps had been replaced by ramps, and their vast size ensured I didn’t knock over merchandise.  However Phil had to forfeit a coffee, as there were six steps to get in to Cafe Patisserie and no obvious disabled route.  A few shops sprayed perfume at the front door, so I had to drive in quickly, holding my breath so it wouldn’t irritate my lungs!  We were amazed and confused by ‘M&M World’- a four story high store, devoted to the chocolates M&Ms.  Are they popular enough to need an enormous store in a prime London location?!

Interestingly, I found it more difficult to breathe in the capital.  I’d never noticed it prior to my illness, but as soon as we exited the tube at Green Park, we could both smell and feel the car fumes.  It made me thankful that I live in a village with clean air.  How hard it must be to live amongst fumes with PH.

I’d worried about driving my mobility scooter amongst the busy streets.  The first time I’d scootered amongst a crowd, I’d felt vulnerable and nervous, as I am half the height of people so cannot always be seen.  However nowadays I’m very confident on it, and comfortable scootering along the pavement, weaving in and around people.  Besides most quickly move out of my way for fear I will drive over their toes!  😉

The queues outside the Lego Shop 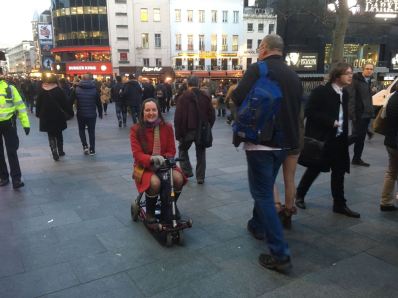 We had a wonderful date weekend in the biggest city of them all.  A treat long abandoned due to my illness.  A reminder of normality and our former life.  Driving home on the motorway, we played our ‘Les Mis” CD on full volume, and bopped and danced and sang and chanted.  And then I went straight to bed!