Until this week, I had never visited an Intensive Care Unit (ICU).  Never visited as a patient.  Never visited as a relative or a friend.  The picture of it in my head had only been formed from watching ‘Casualty’ every Saturday night as a child, and binges of ’24 Hours in A&E’ more recently.  Through the safety of my television screen, I’d watched the noise and the drama and the machines and the frantic doctors.  Quite honestly, it scared me.  It was not somewhere I ever wanted to visit.  But then I was put on the transplant list.  And whether I like it or not, when I agree to receive new lungs, I will also be agreeing to spend days or weeks or months in ICU.  It had become the most dreaded part of the whole journey.

So I decided I needed to visit it first.  I needed to see it, smell it, hear it.  I needed to know what to expect when I opened my eyes after the operation.  I needed to shock myself and scare myself.. and then allow myself to recover and relax and feel more comfortable being there.  So we arranged for the hospital psychologist to give Phil and I a tour.

After discussed my fears, we entered the double doors.  Paul stopped us a couple more times to look around, acclimatise and talk.  And then we were there, standing in the middle of a bustling Intensive Care Unit.  It was smelly, noisy, bright, busy.  Machines swamped each patient’s bed: complicated, intimidating, beeping, flashing equipment.  Keeping people alive, monitoring their every function.  Doctors and nurses were everywhere; one watching each body, others swarming around.  Bright artificial lights: harsh, yellow, unnatural.  The alien smell of disinfectant or cleaner.  Poorly, poorly patients.  Most were unconscious or sedated; lying still, not moving, looking dead.  Wires going in to chests, tubes in to throat, patches on torsos.  However, I breathed deeply, and we stayed for longer; observing and noticing.

Then my anxiety lessened.  So I began to see through the haze of my initial observations, which had been greatly influenced by my preconceptions.  The machines became less intimidating and more familiar, as I started to recognise what they were for.  I acclimatised to their moving graphs and their flashes.  I relaxed from the white noise of their repetitive rhythms.  I realised that the swarms of staff weren’t frantic and panicking; but were calm and assured; carrying out jobs with confidence and smiles.  This was their territory, their normality, their day-to-day: they knew what they were doing.  The smell disappeared.  Looking more at the sedated patients, I realised that they didn’t seem in pain or panic.  One patient was awake; smiling and relaxed.  And so I calmed down.  I chatted to an ICU consultant, who reassured me of their success rate with PH patients.  I chatted to a Physiotherapist who explained the exercises and rehab work I would be doing initially.  My anxiety levels spiked and dropped, spiked and dropped.  Every time I saw or discussed something new or scary, panic would rise in me, before dissipating as I got used to it.  In my final minutes in ICU, I felt calmer, happier, more in control.  I could picture myself there without being panicked.  I could imagine opening my eyes, seeing the machines and the nurses, and being calm.  I felt empowered.

I now have a plan to help change my mindset.  I realise I have been preparing my body physically for the operation, ensuring I am as strong and healthy as I can be, but have so far neglected to prepare myself psychologically and emotionally.  Instead I have been imagining waking up feeling scared, weak and helpless.  I have been playing out horror scenarios in my thoughts, and accepting them as my future reality.  I have been allowing myself to associate ICU with fear.  But now I realise what I’ve been doing, I know how I can work to lessen my worry.

So I left with a smile.  I left with a plan, and a feeling of power.  I left with a weight off my shoulders, and a sense of achievement.  And after the emotions of the hour, I left feeling sleepy, and in desperate need of a waking cup of tea! 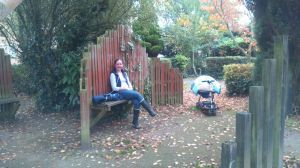