I was four months in to a year long volunteer placement in Ethiopia, when my sister announced she was pregnant with her first child.  My gut instinct was to rush home, but after some agonising, we decided to stay in Africa, as planned.  Through photos sent over the slow sketchy internet, I watched her stomach ballooning and her sparkle shining.  Later, I sat on a cliff, with vultures circling, as texts beeped and announced the labour and then birth of Jacob.  I was elated.  Two days later when I eventually had internet reception, I poured over photos of him.  Taking 20 mins to download, I’d sit waiting patiently as his hair, then eyes, and finally smile, were revealed on the screen.  I’d read and re-read long emails and letters she’d send, telling me everything about his routine, his tricks, his life.  Two months after his birth, I returned to a freezing UK and to meet the little one who’d stolen my heart from afar.  I was smitten.  He was beautiful, delicate, calm, with gleaming bright eyes and black hair.  I’d awake early and sneak in to his bedroom, hoping my staring would wake him so we could begin the day of play.  Even though I spent most of the next year abroad, he always greeted me with a big smile of recognition and a cuddle on my return.  I could calm his tears and make him laugh.  I’d read to him, teach him games, chase him, throw him in the air, sing him songs, dance with him.  I adored my nephew.  One wonderful week, I took him to the park, the swimming pool, to play sessions: everyday, just him and me alone.  I loved spending time with him.  I needed to get my regular fix of his little cheeky smile, excitable laugh, gorgeous singing voice.  Two years later, I drove across London in the early hours, to meet my second nephew.  Less than two hours old, his chubby face was squashed and wrinkled.  Soft lips, blue eyes, confused stare.  Luca was adorable.  I was happy.  I loved being their aunty.  I was the aunty I wanted to be.

When I first got ill, my nephews were 2 years old and 4 months old.  In the early months, I really struggled when my sister brought them to visit me.  I suddenly couldn’t cope with being around children.  They were noisy, they were demanding, they were energetic.  I needed peace and quiet, yet they multiplied the decibels in the house.  I needed relaxed and calm, yet they were little hurricanes of energy.  I needed a tidy house, yet they left a trail of destruction.  Shouting, singing, crying, laughing.  Toys flying, bouncing off the walls, running around the rooms.  Cars poked under the sofa, half-eaten crisps on the carpet, rearranged furniture.  They would be allowed to see me for twenty minutes at a time, before being shooed out to play elsewhere so I could rest a while.  I didn’t have the strength to pick them up, I didn’t have the breath to read to them, I didn’t have the energy to play games.  My arms were so weak, I could only cuddle Luca on my knee, if someone else supporting him.  I could barely talk to them.  Instead I would lie there watching them… just observing from the sidelines.  I became an ornament with eyes.

Their visits provoked a dichotomy of emotions.  On one hand, I longed for, and adored seeing them. I loved watching the littlest precariously trying to remain seated before falling back on to a cushion, or later waddling barefooted across the grass.  I loved watching the oldest transfixed as he spun wheels, or excitedly collected stones in my garden.  I loved their animated faces, as Luca spoke his first words, or Jacob sang a nursery rhyme.  Their visits became the highlight of my month.  They cheered me up, gave me fight to recover.  But on the other hand, Sundays with them made me poorly.  It would be succeeded by exhaustion and sickness and days unable to move.  Their visits also made me sad.  I would be left tearful that I couldn’t be the aunty that I wanted to be.  That I had been, before I got ill.  My relationship with them changed overnight.  I missed so much of their early lives, did not play the central role I always hoped I would be able to.  It was heart-breaking.  I’d watch the pleasure shining in their little eyes as they jumped all over my brother, or got tickled and kissed by my mother.  They adored their Uncle and Nanny.  They adored the rough and tumble games they could play, the noise they could make together, the chaos they could create.  And it made me sad, and jealous, that I wasn’t able to join in.  In the beginning, the eldest Jacob, would ask me when I was going to be well again.  He’d talk about getting medicine for me, he wanted to make me better.  But then over the months, I didn’t improve.  Instead my illness became their normality.  So I became the ill aunty to them.  I have now been ill for three and a half years.  They have long since forgotten the aunty I used to be.

In the last couple of years, I’ve regained some strength, so am able to cope with the chaos and hurricanes for hours at a time.  My relationship with them has improved; instead of the ornament with eyes, I am an old pet dog: playing then watching, playing then watching.  We chat about superheroes and trains and rocks and gems.  We can enjoy stamping, colouring, or playing with stickers.  The odd calm game of Guess Who or sorting the fish.  Out and about they jump aboard my scooter for a ride, taking over the controls.  Or race me on their bikes, easily beating my four mph top speed!  They are boisterous feral boys; they want to run and bike and squeal and shout.  So although I am strong enough to be with them more, play with them more, I need extra energy and working lungs to be the aunty they need me to be.  And that it how I thought it would always be.  With a heavy heart, I had learnt to accept that. 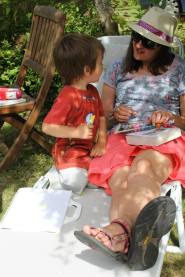 But now with the chance of a transplant, I have been given hope that I may be the aunty they need again.  Transplant not only allows people to live for longer, but it gives them a second chance to do the things they have long since lost the ability to do.  It improves the quality of their lives immensely, and with it, the lives of the ones they love.  Last week I spent a couple of hours with the boys; climbing and swinging in the park, and scootering around the lake.  Jacob has just turned six, and Luca is nearly four.  As I sat on the sidelines watching Phil swing them higher and faster, I wondered whether this time next year I would have new health.  Would I be running after their bikes, clambering with them on the climbing frame, lifting them up to reach the monkey bars?  Would I ever get a second chance to be more than their ill aunty?  I hope so.  🙂

2 thoughts on “The Ill Aunty”