I last had a hospital appointment in June, three lovely long months ago.  Since then I’ve been deliberately postponing them.  I’ve received monthly letters from my Pulmonary Hypertension team inviting me along for a check up.  I turned down June, I turned down July, I turned down August, I eventually agreed to go along in September.  I have never postponed any of my appointments before.. but I just needed a break!  Between March and June, I felt like I was being checked over by doctors repeatedly.  “Take off your clothes”, “Lie down here”, “Breathe in to this”, “Walk, walk, walk”.  Cold stethoscopes on the back, gooey gunk smeared on the chest, peeling off ECG stickers stuck on the top half.  Prods here, needles there, prods here, needles there.  There were appointments, check ups, tests, results, meetings.  Hospitals were becoming my life, being ill was becoming my life, …and quite frankly I really needed a big break from it all.  I needed a chance to be me again.  I needed to not let the medical problems and the transplant become the centre of my life.  I wanted to be a person with hobbies and interests, someone who makes the most of summer, …and I really needed some fun.  Besides, I felt ok, so was hopeful that this meant I wasn’t deteriorating too quickly.  And to be honest, if there was a problem, as there is nothing they can really do, it would just cause unnecessary worry.  So yep I postponed the summer appointments, and just had some fun.

So after three months without anyone checking on me, I eventually (and nervously) travelled to Oxford to see my consultant.  Since the mix up in the midst of my deterioration, at the start of this year, I’ve been looked after solely by the Brompton hospital.  However I alternate between visiting the whole PH team at the Brompton for my appointments, and meeting one of them, Dr Price, at the JR hospital in Oxford, so I needn’t always travel in to London.  It is nice that I still get to occasionally catch up with the lovely Oxford PH team, whilst reassuringly being under the sole care of the Brompton specialist. 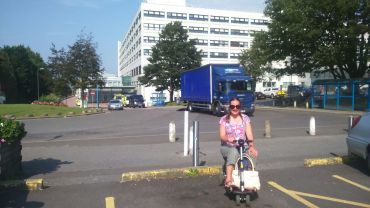 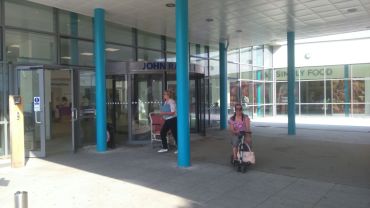 I’d recently reduced my steroid dosage, which had increased my symptoms and made me quite poorly in the week leading up to the appointment.  I was still very fatigued and weak on the day, and was particularly dreading the six minute walk test.  Amazingly, wearing oxygen, I managed to walk 400m in six minutes!  What a relief!  This was the same distance as in June, and my second furthest result ever.  I’ve been trying to walk more regularly on my treadmill at home, so combined with the steroids and the oxygen, it seems to be helping keep my lungs open and working.  My legs really struggled in the test though, because of the steroid reduction they were really fatigued… so they turned to jelly!  I was wobbling along!

Then I had bloods taken by a rather nervous and heavy-handed newbie phlebotomist. Before being covered in stickers for the ECG.  And finally the gooey echocardiogram.  Due to a mix-up they’d forgotten to book me in for this test, but I felt it was important to check on my heart so requested that I was squeezed in.  The rather stern sonographer sent me in to a panic when she refused to tell me how how my heart was looking, insisting that the doctor needed to talk to me about it.  However it was all good!  There has been no change since June.  So my heart is still coping quite well; it is working reasonably efficiently and is not particularly enlarged. I was very reassured, as the condition of my heart affects the likelihood of a successful transplant.  I need my heart to continue to cope despite the lung problems!

Finally I had my appointment with Dr Price, my PH consultant from the Brompton.  I really enjoy working with her.  Unlike others, she is not intimidating or all-knowing, but instead works with me as part of a team.  She answers my questions, listens to my opinions and supports my needs.  She is genuinely pleased when I have good news: on that day she commented “It made my day you walking over there”, as I’d significantly improved since being so poorly earlier in the year.  She listened to my heart and lungs with a stethoscope, checked my ankles and stomach for swelling, took my blood pressure, inspected my nails, examined my gums.. and prodded me all over!  We talked about Pulmonary Venous Occlusive Disease, the physiological problem and the consequences of it.  We talked about genes for lung diseases, doing regular lung function tests, the hole in my heart and steroid decreases.  We talked about my lungs working at 24%, waking up unable to breathe, high red blood cell levels and eating more bananas.

Interestingly we compared my current lung function test results with those measured at diagnosis in October 2013, especially the score which measures how well my lungs transfer oxygen from the air sacs in to the blood stream (TLCO).  Surprisingly my lungs were functioning at 24% back then as well!  It would therefore seem that I did not recently develop Pulmonary Venous Occlusive Disease (PVOD), instead I have had it for a number of years.  In fact, we believe that the PVOD caused the Pulmonary Hypertension to develop in the first place.  Therefore my PH is no longer classed as idiopathic, but even rarer caused by PVOD/PCH.  I am quite amazed that I have had the disease for so long, when it has such a poor prognosis.  Well done little body!  I did question why the PVOD had not been picked up at diagnosis based upon the TLCO score then, but it was just mistakenly overlooked.  Realistically recognising I had PVOD at the start would not have made any difference to the medicines I was put on or the care I received, only that I would have been put on the transplant list earlier.

In all it was a positive appointment; my body is coping well and is still stable.  I’m really pleased that I was a little naughty, and kept postponing going.  I have had a lovely summer without medical checkups.. but now I’m back on the treadmill of tests and meetings and prods and goo.   I’m due to have six hospital appointments between now and Christmas.  Yes I’m definitely back on the treadmill!

One thought on “Time For A Check Up”