When I was little I went to swimming lessons every week for many years.  I loved swimming lengths up and down, but my favourite part was when we got to do exciting things like diving for the brick at the bottom of the pool, or playing water polo, or even treading water whilst watching the clock.  I’ve rarely had to use these swimming skills as an adult, but I’m beginning to think that some of them were taught to me to prepare me for my current illness.  Prepare yourself for lots of swimming analogies!

I’m currently treading water.  I have been for a few months now.  But I’m definitely aware that I’m treading water now.  Up until this latest decline in my health, I was having a lot of fun and achieving a lot-  in fact you could say I was swimming a slow and steady breast stroke.  Everyone else might be zooming past me in the pool of life, swimming their quick front crawl strokes, but I was very happy to just plod along living a slower but very contented life.

But then this latest deterioration has happened, and I’ve had to stop swimming for a while.  I’ve had to start treading water.  Instead of moving forward in life, I feel like I’m being made to stop… and wait… and wait.

After my latest hospital admission about 2 weeks ago, all of the Brompton PH team were getting together and having a meeting about me and my latest results.  As I said previously, it seems that there may be something strange happening in my lungs, which essentially means that some of my blood is bypassing my lungs, so is not getting oxygenated.  This would explain my oddly low oxygen saturation levels at the moment.  When I am sitting, my oxygen saturation levels are very similar to a ‘normal’ persons (97%).  However when I start moving or doing anything, my oxygen levels drop.  To an extent this is normal in PH, however the amount they are currently dropping is not normal for me and is also not normal for my variety of PH (idiopathic).  In the summer, my oxygen levels might have dropped to the low 90s after a 10 minute activity (e.g. washing up).  However currently they are dropping to the low 80s and even high 70s when I’ve only been doing the same activity for a couple of minutes.  They have evidence that some of my blood is bypassing the lungs, and so it seems that this lung problem is in addition to my PH.

However, unfortunately, they’re not sure why.  Yet.  Apparently I am “an enigma”!  Despite spending a long time discussing me, there was no clear conclusion after the last meeting, so they are now going back to basics and looking at everything related to my case again.  I am quite lucky, at Oxford all of my scans, notes and tests were stored electronically, so they can be easily sent over, and the Brompton will be able to watch on screen every echo I’ve ever had, as if they were there at the time!  Very clever!  They have postponed changing my medicine until they have worked out the reason for the lung problem, in case that affects what needs to happen.  So that second meeting is happening today, and I have my fingers crossed that this time, with all my scans in front of them from the last 2.5 years, they can work out what is going on and therefore work out a plan of action.

After the last meeting, they were also able to give me some happy news.  Apparently my heart is working really well still.  The echo showed that there is still no enlargement, and that my heart is pumping reasonably effectively and in the correct rhythm.  They can measure a protein in your blood called BNP, which indicates the development or worsening of heart failure.  At the moment my BNP level is only just higher than that of a ‘normal’ person.  So my heart appears to be currently coping well with the oxygenation problem I am having.  Well done heart! 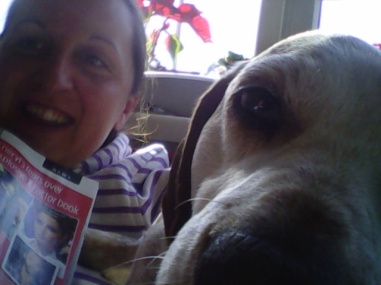 So for the last couple of weeks I’ve been in limbo, treading water and waiting for this latest meeting to see what we can do.  As with treading water, at the beginning it was easy to just sit and wait.  I was happy to content myself with doing my photobooks and watching films.  I even managed to contain the urge to ask Dr Google what he thought I had!  However last week was more difficult, it was as if I was looking at the pool side clock and realising I still had ages of time left to tread water for.  Then, similar to being thrown clothes to wear whilst treading water, last week my lungs got very irritated and my breathing was even worse!  Despite using my air purifier, an inhaler, and removing all possible irritants from the house (e.g. flowers!), my bag of air was very small and my lungs felt funny.  On a couple of days, I even stayed in my pjs all day.  However my Mum came to the rescue.  My weekly cleaner had not been for 2 weeks as I was in hospital, and it seems I am now really sensitive to dust!  2 weeks of dust and I could barely breathe- madness!  So she spent a full weekend cleaning my house- and I mean a proper deep spring clean- and my lungs have cleared ever since.  Thanks Mum  🙂  I also think I spent too much time worrying about it last week.  One of my Oxford doctors had previously advised me to try and keep my oxygen levels above 85% (as below this it can cause problems for the body), so I’d spent the week with my oxygen monitor permanently on my finger as I tried to make sure it wasn’t dipping too much!  Very stressful as I was thinking too much about it!

However this week my treading water has been much easier.  Thankfully my lungs have calmed down, but also I’ve now got a better understanding of what I can currently do.  The oxygen monitor is no longer a permanent attachment to my finger, and instead I’m letting my common sense and body awareness dictate when I need to stop and rest.  I have done a lot of thinking and have decided to accept the new current me.  Instead of sitting down all week I’ve started to take on cooking and washing up again.  I’ve learnt that I can do these activities if I rest repeatedly whilst doing so.  So the washing up is now requiring at least 5 rest sessions and takes half an hour!  But, although things may take me much longer (as I have to keep stopping to bring my oxygen levels back to normal) I can eventually do some of them.

In fact I’m starting to forget about treading water, I’m thinking about starting to swim again.  I’ve no idea if they’re going to come up with an answer today; maybe it’ll take a few months, maybe they will never be able to help solve it.  But I don’t think it is healthy to be constantly waiting and hoping things will improve.  So if this is the new me for the next few months or even years, then I’ve got to accept it and move on.  I’m starting to try to do the occasional doggie paddle, trying out what this new me is capable of again, pushing myself slowly to see what I can do.  I’ve been on a few dog walks/scoots to get out of the house.  I’ve had a couple of visitors again, and we’ve started putting people in the diary who want to come over.  Before they may have been able to come for the whole day, and now they’ll only be here a couple of hours, but hey ho.  We have just booked a holiday to Yorkshire next month.  I might not be able to get out and about, like on previous holidays, but just being in a different living room will be nice!  I’ve also today just bought some tickets to watch rugby and tennis matches, and confirmed another holiday in June.  I’ve decided that we can’t keep putting off life whilst we wait for me to get stronger again.  Ok maybe I’ll never get well enough to do breast stroke again, but I can at least move very slowly forward with doggy paddle.  I think I need to stop treading water. 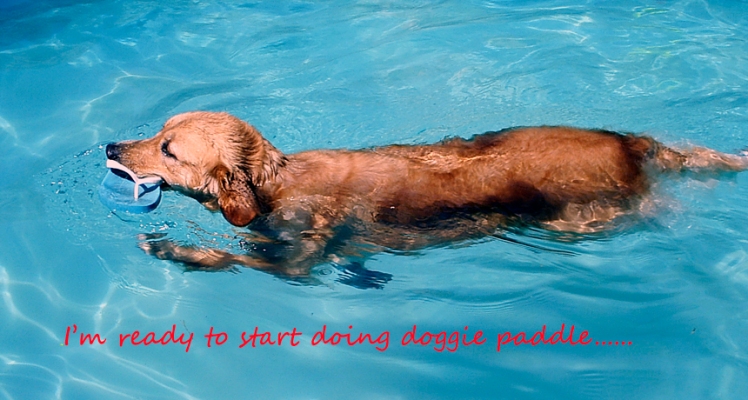