After a difficult few months, I was booked in for a procedure to get a definitive answer about whether my PH was progressing, or if this was just a normal blip.  I’d not normally be so keen to have a Right Heart Catheter (RHC)-fiddling with wires inside your heart whilst you’re awake, is not the most relaxing procedure -however in this instance I agreed readily.

Pulmonary Hypertension is characterised by abnormally high blood pressure in the pulmonary artery.  Month to month, my cardiologist relies on echocardiogram scans to estimate the pressure inside the heart, as it is much quicker, safer, and cheaper (as only uses one doctor), but not always correct.  However the RHC is the gold standard method; it gets an accurate reading as it places a monitor inside the heart.

We left Lottie (the dog) with our pyjama-dressed neighbours at some ungodly hour, as we were due at Oxford for 7am!  I was starving as no food or cups of tea are allowed until afterwards.  Firstly I undressed (completely!) and put on a gown (plus two pairs of socks- it was cold!).  Then a tiny catheter was placed in the back of my hand (so they can give meds during the procedure) and blood tests were taken.  Next my temperature was recorded, oxygen saturations were checked and an ECG was set up.  After it was paperwork, paperwork, paperwork- answering the questions of different doctors, the anaesthetist and nurses, before signing my consent to have the procedure.  Then… just wait.  Luckily I was the second person in  🙂

The first time I ever had an RHC, I remember being pretty freaked when entering the catheter lab- it looks like a mini operating theatre!  Big computer monitors are attached to the bed, lots of scary looking equipment is at the side of the room, and there are about 8 people whizzing around doing different jobs- some in the lab and some in the glassed off section.  Even though I knew what to expect, on entering I started shaking- however a dose of diazepam soon had me smiling again!  I was attached to an ECG, a sats machine, a catheter in the hand, and an Xray machine was pulled down above me (above 20cm above your head and chest).

An example of a catheter lab

People behind the glass, monitor the screens and recording instruments

My previous two RHC’s had been performed by my regular consultant, and the catheter had been inserted through the groin.  However this time I had a trainee performing it through the arm, whilst my consultant observed.  Surprisingly as your arm is numbed, it doesn’t hurt; in fact I could feel nothing until.. you suddenly feel a flutter in your chest and then later in your heart, as the catheter is guided along the Brachial vein through the body and in to the heart.  I imagine that is what it would feel like if a butterfly was to start flying around inside you!  Incredible what doctors can do!  I loved watching what they were doing on the screens; the xray machine takes photos to show the consultant exactly what he is doing, and where he is.  It is amazing that he can tell from it which chamber of the heart he is in, and then accurately move it to the next place for measurements! 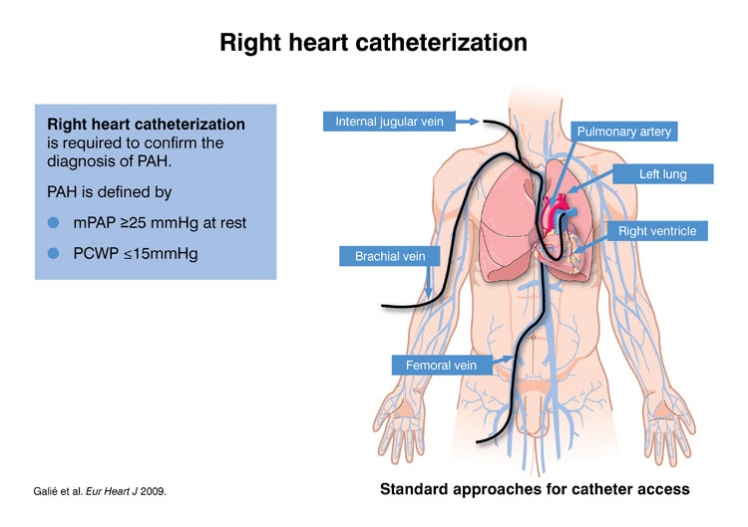 We’d previously decided to measure the pressures whilst I was doing exercise in the RHC, to see if maybe my pressures rose abnormally during this.  I had no idea how they would do this and was invisaging having to run around the room with wires still in my heart!  However, very simply, I just had to raise my legs up one at a time whilst I laid down, again and again and again, and more pressure readings were taken.  Then it was all over and the catheter was pulled out (ouch, that did hurt).  Actually I was rather concerned that they’d left part of it in me, as the xray still showed wire inside my heart, but I was reassured that the photo on the screen was from 5 minutes ago, and it was most definitely all out!!

The first time I had an RHC, as I moved afterwards, my blood from the wound literally shot out and hit the roof of the ward, splattering everywhere.  That was impressive, especially as the nurses all came dramatically running over to stop it!  This time was not quite as dramatic, the blood just squirted all over my gown and down my arm.  And after 5 minutes of hard pressing and three bloody bandages it eventually stopped!  Then I was allowed a big cup of tea and a sausage roll, and after a 4 hour rest (and monitoring), I was allowed home.

So what did the pressures show?  Well unfortunately my PH has progressed and my pulmonary pressures are raised.  It is now classed as “moderate PH” again, in fact it is now very slightly higher compared to when tested at diagnosis.  On a positive, although my heart is not pumping as efficiently as before, it is currently coping ok with the pressure and is not enlarged.  We believe that is why I am currently not as disabled as I was back in 2013, when my heart was in a poor state.  I have mixed feelings about these results.  Initially I was actually quite relieved that there was an explanation for my recent breathlessness.  I’m so used to symptoms being unexplained, that I was happy that there is a cause, thus in theory this can be treated.  However I’m also pretty sad that after only two years on dual therapy, my body now needs something different.  I was hoping to stay on oral medication for a few more years, but it now looks like that might not be the case.

So tomorrow (Tuesday 2nd) I go in to the Brompton for more testing and hopefully to start a new medicine.  I’ll explain more about this treatment, when all the tests have been done and it has all been confirmed.  I’m supposed to be there for 2.5 weeks, which is incredibly daunting, after having such a scary time there in 2013, and hearing what this new drug entails.  However I’ve just got to think of the end result- hopefully in a few weeks I’ll be leaving again feeling a lot better and with a new drug that’ll keep me going for a lot longer!  Phil has nearly finished building our campervan and we have a whole summer of camping fun planned, so I am resolved to get stronger again.  I’ve been here before and pulled myself back up, and i’m determined to do so this time!

11 thoughts on “A Right Heart Catheter”