As a child I was allergic to cats. I ‘d sneeze when sitting next to a furry feline, or get itchy eyes when one rubbed against my legs. Luckily I rarely had contact with any… my siblings preferred pet rabbits! 😉 Later I had occasional summers with slight hayfever, and developed a mild sensitivity to plasters and latex. But that was it. No serious allergies or reactions or responses. My body loved everything else in the world. I could eat anything, wear anything, go anywhere. Until last October…

Out of the blue, my lungs suddenly started reacting to irritants in the air. Irritants that were never irritants to me before! 😛 They’d shrink if exposed to something they didn’t like; making me breathe from a small bag of air for days at a time. My oxygen saturations would fall, my face would go bright red, and I’d be left exhausted on the sofa. Pretty horrid! Although I initially worried that these episodes of ‘tiny lungs’ were random, over the months I realised that my body now hated chemical sprays, perfume, smoke and dust! Yep, all are pretty hard to avoid in modern society! My Brompton respiratory consultant was perplexed; it wasn’t obvious what was causing my lung problems. But she prescribed a broncho-dilator inhaler as an experiment; which happily improved some of the symptoms. I now only reacted twice a week, instead of almost daily… and it only lasted a couple of days instead of five. The firefighting NHS had calmed the flames to a smolder, so she was happy. But I wasn’t. I wanted the flames to be extinguished completely. I needed more advice, a name, a solution. So I joined the waiting list to see an allergy consultant. 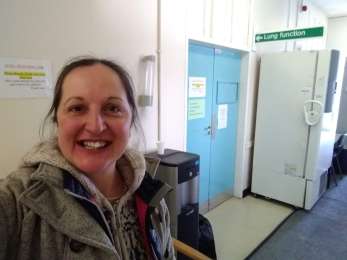 After a three month wait, I’ve now had two appointments with respiratory consultants at Oxford. I was actually a little embarrassed to be seeking a second opinion, but I’m glad I did. We had some interesting discussions and debates… and I now have a tentative diagnosis. Randomly, out of the blue, with no previous hint of the condition… they think I’ve developed Asthma. So that’s four lung conditions I have now then! 😉

However this diagnosis is tentative. The doctors cannot be certain or completely sure this is the right label, as once again I’m not straight-forward. I don’t have any of the usual symptoms, I don’t fit half of the standard criteria, I’m not an easy case. Unlike ‘normal’ asthma sufferers, I don’t wheeze, make noises, feel chest tightness or cough. Unlike normal asthma sufferers I don’t have instant relief from my symptoms when I use my inhaler. Unlike normal asthma sufferers, I experience a fall in oxygen saturation during these episodes, and have symptoms for many days. However, just like them, I am reacting to airbourne irritants. Just like them, I sometimes cannot breathe out as much air during ‘tiny lungs’ episodes. And just like them, my inhaler has significantly decreased my sensitivity to the irritants. I can’t tick every box on the asthma chart, but I can tick some of it. We’re assuming the unticked bits, the differences, are because of my two existing lung conditions. So having ruled out everything else, the doctors are left with this. Best fit, best guess.

The doctors also tested my blood for antibodies against the eight most common allergy triggers. Unfortunately they don’t check everything, so couldn’t confirm all of my recently developed aversions. However the blood tests did show a high allergic response to house dust mites. (So Phil has agreed to clean his musty wardrobe at last! 😛 ). And also a positive response to grass pollen. Much to Lottie’s and my relief, I’m not allergic to dogs! And in fact, interestingly, I also don’t appear to be allergic to latex or cats or rapeseed… triggers that have previously caused me issue. It would be brilliant if I’m beginning to outgrow those sensitivities of the past, however it is possible to still have reactions without getting a positive result. I think I need to stroke a cat in a rapeseed field wearing latex gloves to see! 😉

On one hand, I’m very happy with this latest news. I’m relieved to get a diagnosis at last, after a tricky five months of over-sensitive lungs. It took me many years to get diagnosed with my other illnesses, so it is wonderful to have discovered what is wrong so quickly. Also asthma is a very common illness, that millions of people live with easily. It gives me great hope that my symptoms will be brought under control, and I’ll not have to endure the awful episodes of ‘tiny lungs’ very often. Furthermore, there are hundreds of asthma doctors, there are thousands of pounds spent researching the condition. It is quite comforting, and novel, to have an illness where there is plenty of advice available to help live alongside it.

However, on the other hand, I’m not completely convinced by the diagnosis. I’m not confident my ‘tiny lungs’ episodes are asthma. I don’t fit most of the criteria, nor tick all of the boxes that would normally be associated with the condition. Although the doctors are tentatively concluding that it is this, their indecision and lack of confidence in their diagnosis, worries me. I’m concerned that they’re just giving me that label to appease me. I have spent the last six years surrounded by those in the rare disease community, who have been misdiagnosed. They, like me, have spent years searching for the real answer, after being told it was something else. It has taught me to question everything, taught me to advocate for myself, taught me to keep pestering until I’m happy. And at the moment I’m not. I have a niggling worry inside that once again I’m being misdiagnosed. There are just too many boxes unticked, symptoms not matching, doctors not certain. And every day that I remain misdiagnosed, is a day when my ‘real’ condition is being overlooked. Maybe progressing. Maybe missing out on appropriate medication. My consultants will now stop looking for anything else; stop wracking their brains for other causes. All breathing issues in future will just be attributed to asthma. Doctors will just see this latest diagnosis and believe it, not realizing it has been given with hesitancy.

So I need confirmation. Assurance. A firmer diagnosis. I’ve agreed to record how much air I can breathe out for the next few months. If it is asthma, then I should only have a reduced expiration flow when exposed to irritants, not at random other times. My dosage of inhaler has also been doubled, to see if this will help reduce the number of reactions, and the severity and duration of these incidents. If it is asthma, then I should see improvement. Furthermore we’re also going to give the house a thorough spring clean, including removing the pesky dust under the bed! 😉 If it is asthma caused by my allergy to dust mites, then I should feel better and have less incidents of ‘tiny lungs’. Fingers crossed!

So after just five months of searching, I have a diagnosis. But only time will tell if it’s the right one! 🙂

4 thoughts on “The Allergy Specialists”