Phil and I have a list of ‘House Jobs’ stuck to our fridge door. Most tasks are ticked off quickly, but one remained on it for 6.5 years. Every time we grabbed milk, we were reminded that we’d made zero attempt to achieve it. Guilt! The problem was it was gigantic, massive, intimidating. We didn’t know where to start. And my Pulmonary Hypertension created extra obstacles to make it even more difficult. It just seemed impossible to us. But at long last, we have finally finally finally ticked off that glaring task. We have renovated our kitchen! 🙂 Hallelujah!

I was fit and healthy when we bought our current house. Young and keen and ready for a challenge; we relished the idea of turning it from an unloved rental property, into a very loved family home. We were brimming with enthusiasm and confidence, and although we had no experience of DIY, we naivety assumed that we’d soon have everything transformed. The dated decor, faded carpets, and wood-chip adorning every wall seemed manageable. Even the decades old kitchen and bathroom didn’t faze us. We had plans and ideas, and plenty of free time and money to transform it. But then a mere five months after moving in, and with only the bedroom decorated so far, I became very unwell with Pulmonary Hypertension. Suddenly there were huge hurdles blocking our path to a beautiful home.

The workforce was halved as I was too ill to help with any of the manual jobs. The spare time vanished as Phil now needed to spend his weekends cleaning and washing clothes and making memories with me. The spare cash was reduced as I’d had to retire from my teaching job. We were suddenly nervous to create dust and mess because of my struggling lungs. And were apprehensive to begin a time-consuming and stressful job that would make me more symptomatic. With limited energy, I couldn’t browse design shops for inspiration, or even to pick paint samples. And due to a combination of brain fog, anxiety and rock-bottom confidence, I struggled to decide the decor of each room (yet I refused to give Phil full reign, for fear of clashing colours! 😛 ). Consequently the house we assumed would be transformed within a year, was not. On the first anniversary of moving in, every room bar one lay unfinished, dated and drab; desperate for the attention of paintbrushes and wallpaper strippers.

Over the next few years, despite the obstacles caused by PH, we finished half of the house. However the two rooms most desperate for work, remained untouched. We couldn’t fathom how we’d be able to sort the kitchen and dining area: the job was in a different league to everything we’d done before. Aside from needing new units and tiles and flooring and paint… we also needed to knock down a wall, move plumbing around, install new electrics. Merge two small rooms into one larger space. We didn’t have the skills to do it, and we didn’t have the experience or knowledge. When do you tile? How do you level floors? Can we just knock down a wall? We didn’t know what exactly needed doing, let alone in what order. Decorating rooms alongside my PH had been tricky; a renovation project would be messier, dustier, more tiring, more energy-zapping, complex. It would require buckets of organisation and time and energy. It intimidated us, scared us, seemed too big a job for amateurs and illness. So we put it off and off and off. When I was eventually placed on the transplant list, we felt justified to delay it even longer: we didn’t want the call mid-project. So for 6.5 years the dream remained just a scribble on the job list on the fridge. 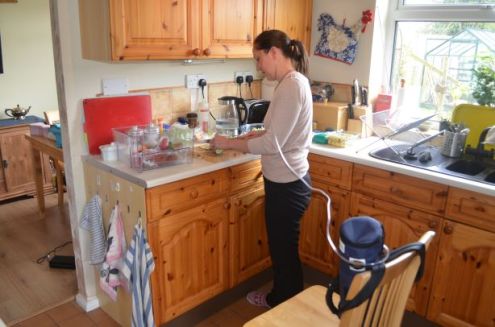 You can see the kitchen and dining room here 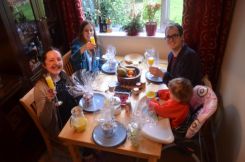 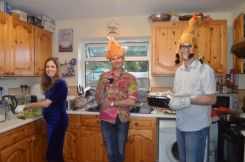 The mishmashed and small kitchen

Exactly one year ago, I was paused on the transplant list. In the weeks that followed, we felt like I’d been given another chance to do things that I’d been unable to do whilst awaiting the call. Aside from holidaying abroad and visiting Phil’s family, we decided to take the bull by the horns and renovate the kitchen. We still had no idea what we were doing, we were still intimidated by the job… but our want to change it was now greater than our fear of everything going wrong.

One weekend I returned home to find Phil had secretly knocked down the wall adjoining the two rooms… we were now committed! Yikes! The whole job seemed enormous and too difficult for DIY newbies, so we deliberately broke it into smaller manageable mini-tasks; only focusing on one at a time. Consequently by completing it in installments, we were never without our kitchen for longer than a day. Once we’d started, for fear of stalling and living forever with a half finished room, we kept the momentum high, going immediately from one task to the next. Intensive! Strangely the trickiest part was designing the layout: we spent weeks drawing pictures and models… before rejecting them all and getting a Wickes kitchen designer to assist! (We then moved our existing units into a similar design… to double check we liked it! 😉 ). Initially the work was completed over weekends (my ‘tiny lungs’ were perfectly timed, as the hubby had free time!), but Phil took a weeks holiday to finish it. His daily biking plans were replaced with DIY from waking until bedtime! We hired experts to complete the specialist jobs: plumbing, electrics and flooring… but Phil did everything else. Removing the old kitchen, plastering the gaping holes, painting the walls. Building the new units, installing them single-handedly, cutting and fitting the trims. He overcame snapped cupboard feet, wonky walls, unlevelled floors. There was shouting, swearing and even tears… but with the help of Youtube, he did it. Wooooo! And did an amazing job. I’m very proud of him. My role was project manager! Arranging the workmen, researching what needed doing, buying everything from paint to tea towels to the cooker hood. And when it was finally finished, I ‘Marie Kondo’d’ our many many boxes of kitchenware and moved us all back in (this took me a week! 🙂 ).

Phil knocked down the wall, and moved the units around to mimic the layout 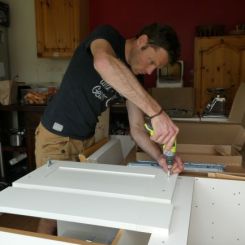 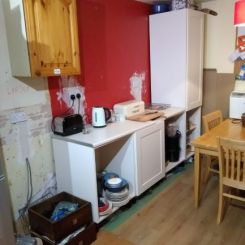 Starting to join the units together on the first side

Mending the enormous hole from the old wall 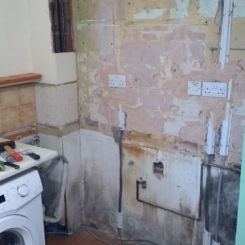 Ripping out units on the other side

But yes it wasn’t easy to do such a project alongside Pulmonary Hypertension, especially with my recent over-sensitive lungs. To reduce dust, all wood-cutting and cement mixing and messy jobs were done outside where possible. Every door in the house was permanently closed, the windows and doors in the work area were always open (it was freezing!) and the air purifier was on continually. Furthermore Phil hoovered and cleaned the downstairs every single evening. I avoided the new kitchen during the day; I cooked lunch using the microwave and steamer in the living room. And in the evening, I wore my mask if nipping to the work area to use the cooker or grab food. I spent a short time each and every day working on the project, spreading my tasks out to thwart fatigue. And everything was bought online to prevent tiring shopping trips. Despite all of our precautions, my lungs did occasionally react; they particularly hated the dust from the wooden worktops and the smell of drying cement- both incidents made me breathless for five days! However for the majority of time, my PH and lungs coped. 🙂 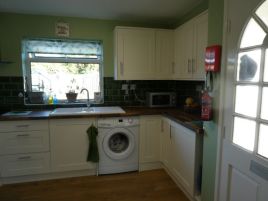 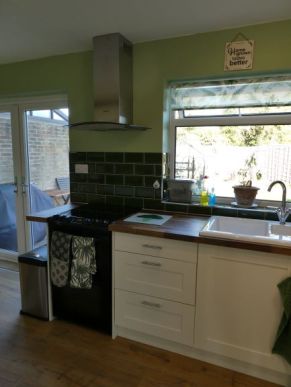 So 2342 days after we collected the keys to our home, we finally have the cooking and eating space we envisioned when we moved in. It’s bigger, it matches and it feels so much calmer. I love watching the birds whilst drinking my morning cuppa on my comfy chair by the french doors. We still have other rooms to decorate, but we’re slowly getting there. And having completed the big one, our confidence is sky high.

And yes, it was brilliant ticking that glaring project off the job list! 🙂