I struggle to walk.  Since developing Pulmonary Hypertension, I can’t get very far on my own two feet.  For thirty-odd years I could walk and run and skip and gallop…. until the day I suddenly couldn’t.  In one sleep, in one twelve hour period, in one night… I lost the ability to plod about.  And although (almost) six years have passed since I awoke to find myself very ill.  Although I have bombarded my body with powerful drugs, attended pulmonary rehabilitation, completed daily physiotherapy exercises.  Although I’ve tried my damn hardest to improve… I am still unable to easily walk further than the end of my garden.  Walking is my nemesis! 😛

For the first year of my illness, I only left the house in a wheelchair.  A bumpy, old fashioned one, borrowed from the Red Cross.  I loved it and hated it in equal measure.  It allowed me to escape my four walls.  Breathe in fresh air.  Go shopping, see family, attend doctor’s appointments.  However I felt so ill and old and unlike me in it… like an actual poorly person! 😉 .  People stared, it jolted me about, and it would get stuck in the tiniest amount of mud and grass and stones.  But worst of all, I had no independence; I could only go where others pushed me.  Phil would navigate me down the supermarket’s beer aisle instead of around the cakes!  And it was embarrassing asking my Dad to push me towards ladies toilets! 😛 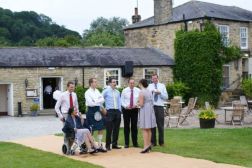 Being a Bridesmaid in a wheelchair

Being pushed by my sister 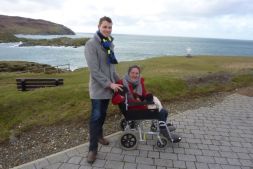 After I’d been ill for about six months, Phil suggesting buying a mobility scooter.  I said no.  I wouldn’t, I couldn’t, I wasn’t psychologically ready.  At that stage I hadn’t accepted that my illness was permanent.  I was still clinging to the hope of a miraculous recovery.  Denial.  It was only when I’d been on medicines for months without improvement that I finally began accepting that this was now me.  But still I rejected all suggestions to look at scooters.  They were for old people not girls in their early thirties!  I could imagine the stares and the comments and the sniggers.  I wanted to hide away not be a focus of attention; slump down in my wheelchair not attract interest.  And having always had company since becoming ill; I was nervous of being alone in public.  My self-confidence was buried underground.  I wanted to stick with the bumpy wheelchair.

But then eleven months after becoming ill, whilst visiting Phil’s family on the Isle of Man… I agreed to try a mobility scooter for the first time!  It was a huge, enormous, massive psychological step for me.  Mammoth.  Maybe it was because I was on holiday and away from people that knew me; maybe I was worn down by the daily pleas from my mother-in-law and husband 😛 ; maybe I was now ready to look forward and work out ways to thrive with my illness, not just exist… but I agreed to hire a ‘Shopmobility’ vehicle.  Although initially hesitant with the controls, I was soon racing along Douglas Promenade.  I adored it!  Zooming up and down, going ahead, riding over to see things that interested me.  Wiggling left to right, speeding past walkers, being on my own outside for the first time in a year.  Freedom, independence, fun.  Possibly people stared or made comments or sniggered… but I honestly didn’t notice.  I was enjoying myself so much.  In that one hour session I did a complete 180.  I wanted a scooter now.  I desperately wanted one. 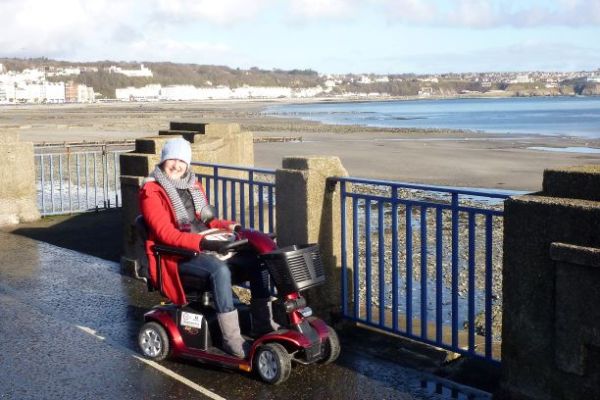 Within weeks I was the proud owner of a lovely red Luggie; a gift from Phil’s kind Nanny.  The smallest and lightest scooter I could find (24kg): it folds to the size of a suitcase, manages 11 miles on a charge, and drives at 4mph.  And as is the width of a normal person, it can go anywhere.  I remember my first supermarket visit: I spent ages filling our trolley with food I wanted from aisles that Phil had spent the last year avoiding!  I remember the first scoot around our village: we could walk side-by-side and hold hands again when outside.  I remember our first trip to the countryside: we were amazed that I could drive on fields without getting stuck.

In the beginning I was embarrassed to drive it around people who knew me.  But on my maiden excursion with my family, they were all clambering for a go.  My nephews jumped on to steer, and we had a ‘Scooter v Car’ race with my brother!  When I first showed my besties, I remember laughing hysterically as one crashed it into a table.  They all put me at ease, all liked it, all wanted to try.  Thanks to their kind boosts when I was feeling insecure, I’ve never since felt embarrassed by my mobility scooter.  Likewise folk on the street have also always been kind… I’ve only had one negative experience (youths shouting at me from their car!).  People regularly joke about hitching a ride, admire it’s size, or come to ask me questions as are interested in their own purchase (I should be on commission!).  Little children often stare out of curiosity; but I always smile and answer their questions, so they realize that disabled people are ‘normal’ too! 😛 . 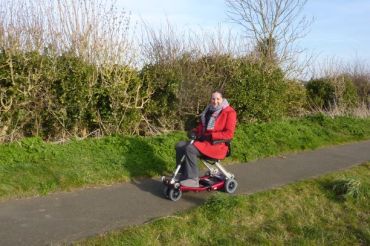 My first trip on my scooter! 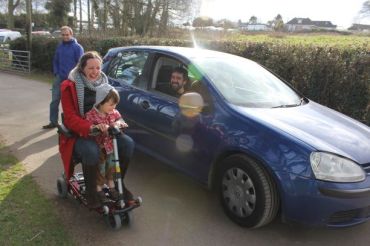 A race against my brother!

Initially I was nervous of controlling it.  I made rookie errors: mistaking the break for the accelerator, reversing without looking backwards, riding into the person walking alongside me!  I avoided shops in case I knocked over displays, hated maneuvering it in-front of others, and feared crowds in case I ran over toes.  In fact, the first time I went in a busy area, my Mum went ahead shouting and pushing people out the way! 🙂 . But after many hours and hours of practice, I could now be a rally driver! 😉  I can balance it on side wheels, steer it round obstacles… and my teenage driving instructor would be amazed at my fabulous three-point turns!  Plus I’ve not bashed any ankles for months! 😛

Getting a scooter has given me back my life.  I can once again go wherever I want to on my own.  I can once again meet friends without needing Phil around.  I can once again explore the countryside!  Practically it’s restored my freedom and independence… and psychologically it’s restored me.  In my first year of illness, I lost myself.  I became passive, reliant, dependent; retreating inwards.  An institutionalized patient.  I felt like a burden.  But getting a mobility scooter completely changed me.  It was probably the biggest, most significant turning point in my PH journey.  Suddenly I had choices and options again.  I could look after and be responsible for myself again.  I didn’t felt guilt for needing so much support.  Over time it gave me back my confidence, my strength and my fight.  Getting my own wheels has been the foundation stone to who I am today.  The first brick as I slowly built myself back up.  My little red scooter kinda saved me.

This week is the fifth anniversary of buying my wheels.  Like a loyal friend, it has been with me whenever I’ve left the house these past 1825 days!  I’ve pushed it to it’s limits, driven it over all manner of terrain, and tried to take it everywhere people step.  It’s been with me on every dog walk and day trip and countryside trek.  I’ve ridden it in hotels, restaurants and museums.  I’ve squeezed through shop doors, maneuvered around display stands, and ridden with it in hundreds of lifts.  It’s ferried me to music concerts, sports matches and theatre shows.  And accompanied me on camping weekends, holidays to France, and city breaks.  It’s even carried me half-way up Snowdon!  I’ve driven it along bumpy paths, down dirt tracks, across grassy fields.  I’ve taken it on trains, trams, ferries, cars, ambulances and the London underground.  And I’ve given rides to every little child I know!  It’s been my lifeline these past 60 months.  I would not have had the wonderful experiences I have had these years of illness, nor become the person I am now… without my mobility scooter!

I struggle to walk.  I’m pretty rubbish at it.  But thankfully I have wheels! 🙂 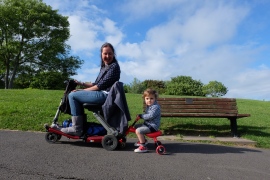 My scooter could pull Nate’s scooter up the hill! 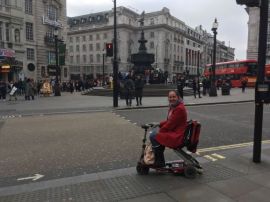 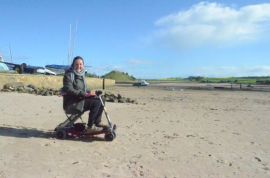 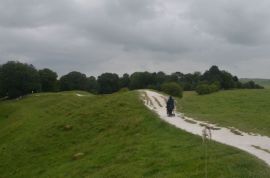 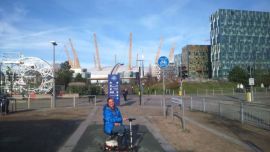 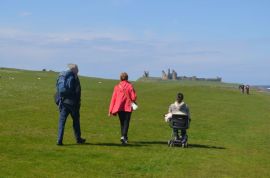 Cross country to the castle in the distance! 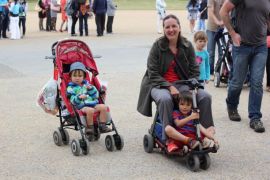 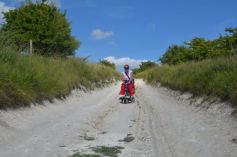 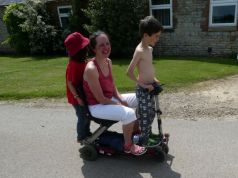 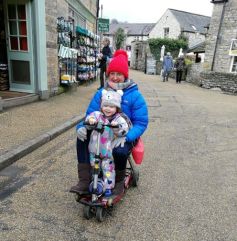 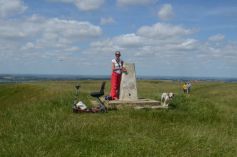 Top of a cairn 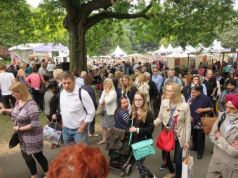 In the crowds at the Chelsea flower show! 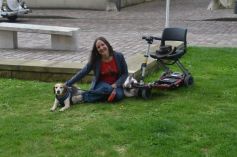 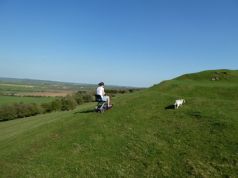 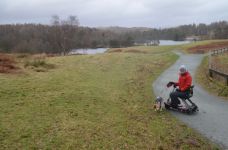 In the Lake District 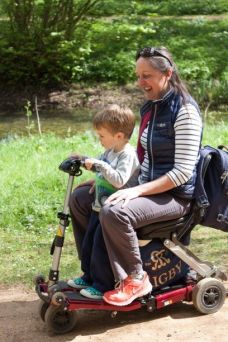 With Harry steering us! 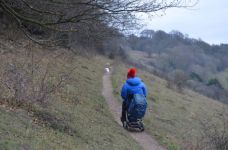 Balancing along a thin path! 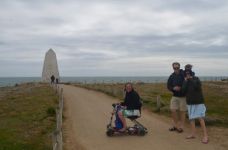 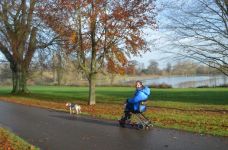 On a dog walk 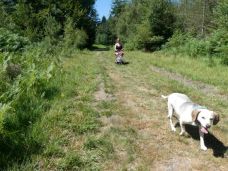 In the New Forest

2 thoughts on “Relying On Wheels”