I’m a combination of both of my parents. I inherited my Dad’s short height and dark colouring, and my Mum’s ‘Mackness’ nose and straight hair. My musical ability comes from my Dad, and my athletic build from my Mum. And I inherited from them both -together- the gene to develop Pulmonary Venous Occlusive Disease. 😛 Yep, I am one step closer to truly understanding why I have this condition, as I’ve just discovered that my faulty ‘PVOD’ gene is hereditary.

Until recently, a lung biopsy at autopsy was the only safe way to confirm PVOD in the UK. Patients suspected of having the disease, received only a provisional diagnosis- it could only be proven at their death or at transplant. However the very recent discovery of a gene attributed to the disease, now allows a diagnosis to be confirmed whilst alive. Scientists identified that I had this new gene back in 2016, after I donated blood to a DNA research project.By some amazing coincidence, they informed my doctors that I had it, in the exact same week that they were scratching their heads and wondering themselves if I had PVOD based upon clinical features. The same week!

Being told I had the gene, brought immense relief. I now had a definitive answer to “Why am I ill?”. No more countless questions and wonderings and maybes. No more tests and prods and procedures. No more false hope with incorrect diagnoses. No more battling doctors to get the answer. Immediate and wonderful relief. But more interestingly, being told I had the PVOD gene, brought great comfort that I was therefore not to blame for getting ill. I’d not consciously realised it, but I blamed myself for being poorly. As my illness had struck so unexpectedly, I occasionally searched my memory bank for reasons why it had happened. Had I picked up a rare parasite in Ethiopia? Was drinking river water whilst canoeing to blame? Knowing I had a gene allowed me to forgive myself for getting ill. It wasn’t my fault. Even if I’d lived my life in a completely different way, I still would have developed PVOD at some point. From the moment of conception, this illness was destined to be part of my future. And so I could relax knowing there was nothing I could have done to prevent it. A huge weight lifted off my shoulders. Finding the gene was psychologically a great healer for me.

However, over time, another question arose… “Why do I have a dodgy gene?”. Was it due to a random mutation at conception, or inherited? My lovely parents, happily donated their DNA to answer that question.

We are all wonderfully unique as are a mixture of about twenty thousand different genes. They are double structured -half the information is from the Mum, half from the Dad- and determine all of our inherited attributes. Genes are made of the DNA or genetic code that tells our body how to work. As we all have many thousands of different genes, it is inevitable that there will be some mutations (the average person has 400 disease causing defects in their genes). However normally, these mutations in genetic code don’t cause problems, as the matching segment of the gene (from the other parent) is not mutated so instructs the body correctly (recessive inheritance). They will only cause a problem and create a disease, if a mutation occurs at the same point in the genetic code from BOTH parents. And that is exactly what has happened to me.

I have two mutations in a gene associated with PVOD (EIF2AK4). One side of the gene has an incorrect letter in the DNA sequence, the other side is missing a letter so stops short. Consequentially my body can’t read the gene sequence correctly, so doesn’t produce a needed protein. Without this protein, the symptoms of PVOD develop. We have just discovered that both of my parents are carriers of the gene for PVOD. Neither display any symptoms or have the disease themselves, as both have a healthy half-gene to instruct their body how to make the needed protein. However, when two carriers have children together, there is a 25% chance of their offspring inheriting both faulty genes (and thus developing PVOD), a 25% chance of inheriting neither faulty genes, and a 50% chance of inheriting one faulty gene (making them a carrier themselves). 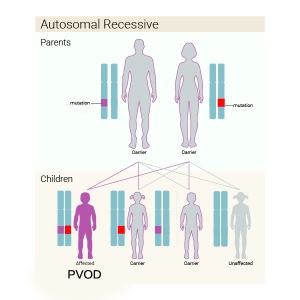 There was no real need to find out whether my faulty gene was inherited or due to a random mutation at conception. It wasn’t about knowing whether my nephews or hypothetical children will inherit this disease (they won’t- my children will be carriers though). It wasn’t about searching for a potential cure (genetic engineering could possibly help others- not in my lifetime though). And it definitely wasn’t about blame. When I told my Mum about her DNA results, she concluded our conversation with an apology for “giving you PVOD”. It took me by surprise. A bit chocked. Because of course they’re not to blame. Genetic inheritance is down to pure chance. It’s not planned. My parents didn’t choose for me to inherit this. They had no control over me inheriting my Mum’s sporting ability, my Dad’s hair colour or my Mum’s ‘bendy fingers party trick’. And they had no control over me inheriting PVOD. No control at all. And furthermore they had no clues that they were both carriers of a lung disease. Some inherited traits are obvious- the family nose, being musical- but some are hidden. The PVOD faulty gene has travelled down both sides of my family tree -generation after generation after generation- with no one aware… until now. The odds of developing PVOD are between 1-in-20 and 1-in-100 million. Super rare. Ridiculously rare. No one could have guessed that my parents were both carriers. The odds was greatly greatly greatly stacked against a carrier marrying a carrier. So no, I don’t blame my parents in any way. I’m thankful that they created me, brought me up, loved me, let me go on school skiing trips! 😋 No blame at all, just gratefulness.

No, the only reason I asked my parents to take the DNA test, was because I wanted to know. My illness has changed my life completely and absolutely; so I want to understand as much as I can about it. I want to comprehend what’s happened and why. Knowing I inherited my faulty gene allows me to once again accept that there was no escaping it. A random mutation at birth would have begged further questions about the trigger and mutation cause. But knowing it was inherited gives me a simple straight-forward answer. From the moment egg met sperm, my future was sealed. I was going to develop PVOD one day. A further jigsaw piece to add to my puzzle.

Knowing why I have my faulty gene, lets me be at peace with it.