I’m a big fan of Gareth Malone.  If you’re not familiar with the name, then he’s the young TV choir master that converts the roughest of voices in to a beautiful song.  Over the last ten years, we’ve watched him train hundreds of awful singers, and be responsible for the Military Wives phenomena and the recent surge in cool choirs (and throughout he hasn’t aged!).  His latest program saw groups of Acapella singers, compete to be the best group.  Literally meaning “singing without instruments”, acapella groups sing the beat, the bass, the harmony- even the funny electronic squeaks!  It sounds like a group of singers with their fancy musical instruments accompanying them, yet it is only their voice.  Amazing.  Ever since Gareth introduced us to it, I’ve longed for the opportunity to hear it in real life.  And as luck would have it, Phil’s Uncle Howard and Aunt Hilary managed to persuade some real life acapella singers to perform in a concert…. and it raised funds for the PHA at the same time!  Double treat! 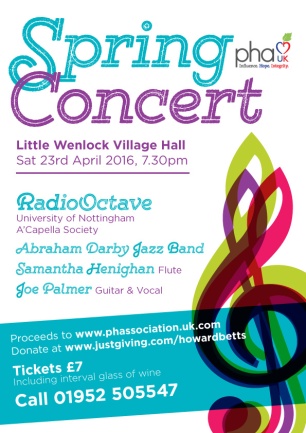 The Pulmonary Hypertension Association (PHA UK) is wonderful small charity who became our lifeline when I was first diagnosed.  The doctors specifically advised us not to google PH as the internet was just full of scary statistics and outdated information.  Instead they put us in contact with the PHA, who immediately sent us lots of booklets; all accurate, current and full of hope as well as realism.  Instead of facing the disease alone, they put us in contact with some wonderful members who have since become great facebook friends.  The PHA run courses educating doctors on how to diagnose this little known disease, and fund research so that one day we will hopefully find a cure. They are the only charity in the UK working to better the world for people with PH.  We felt incredibly honoured and thankful that H&H had chosen to fund raise for a charity important to us.

I was feeling quite tired so Phil and I drove up to Telford on the Saturday afternoon, and after a quick cup of tea went straight to the concert.  H&H had also persuaded an amazing local school jazz band, (Abraham Darby) to play some of their top hits.  When I was younger I used to play the oboe, a beautiful wind instrument that requires a lot of puff!  Remembering the (lack of) quality of our school orchestra, I was incredibly and pleasantly surprised at the standard of them!  It turns out they’re national champions!  They soon had us swaying to the music.  I felt quite nostalgic listening to them and remembering my oboe days!  There was also performances by an incredible flautist (she hardly stopped to breathe and played so quickly) and a lovely acoustic guitar and voice combo. 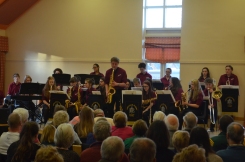 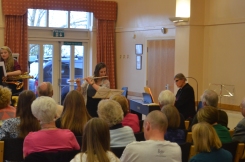 The headlining act was an Acapella group called Radio Octave from the University of Nottingham.  Fifteen beautiful voices who brought an array of songs alive.  There was no background music, just their voices singing every part in the musical accompaniment.  My favourite songs were the medleys -in the Michael Jackson Mix they started with one hit, then some would start singing another, yet the first song would still be being sung.  They were literally jumping from one famous song to another, yet singing all the different songs at the same time.  Sounds confusing but it actually sounded amazing. 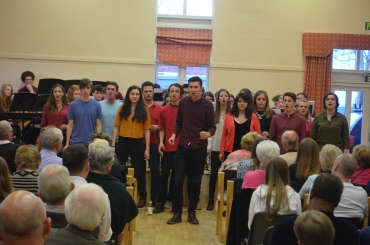 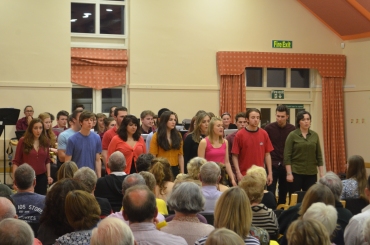 I used to love singing.  One of my favourite activities as a teacher was singing my heart out at morning assembly.  It put me in a really happy mood and was a great way to wake me up.  Since being ill, I’ve really struggled to be able to sing.  It takes so much breath!  At my worse, I could barely manage a couple of words before being breathless, at my best I could just about manage the odd verse in the shower!  When we go to church services, I deliberately don’t join in with the singing as it takes so much puff and energy out of you.  Actually I often just mime the words so I feel like I’m sort of singing and joining in!  I really miss singing, but listening to Radio Octave, instead of feeling sadness, I suddenly realised that there is a chance that I might be able to sing one day if I get a transplant.  I’ve become so used to being ill and not being able to do certain activities, that it feels very strange to imagine myself one day doing some of those activities again.  As I’m still waiting to be told if I’m suitable for a transplant, I’m not allowing myself to think yet about what a successful one could mean.  But I did let myself get excited for just a few minutes imagining singing again!  So “being able to sing a whole song all the way through” has now being written on my post-transplant bucket list!

We stayed with Howard’s friend, Heather, who has a lovely downstairs en suite bedroom, which was brilliant as I didn’t need to attempt the stairs after a tiring night.  She even welcomed Lottie!  Her own adorable puppy was so excited to have another dog to play with, but Lottie was a little scared by the puppy’s energy and kept hiding behind the cupboards!  The next morning we had a catch up with Phil’s cousins for a while, and got to enjoy their adorable little children!  The little ones all seemed to love Lottie and kept following her around and stroking her.  Luckily she’s very laid back and happily tolerated their attention.  We had wanted to take a scoot up their local picturesque hill, but my bag of air was pretty small at this point, so we decided to just head home early.

So in all it was a successful weekend; the concert made an incredibly £1200 for the PHA UK, we got to hear some great acapella singing, and we got to hang out with our wonderful family.  And I also have a new item for my bucket list.

One thought on “A Concert for the PHA”