Throughout December, I always skip track number 6 on my Xmas CD.  It’s special.  Reserved for that magical moment when art becomes reality, and we are indeed “Driving home for Christmas”.  We sing-along as we navigate the M40: it signals the start of our celebrations.  But this year I forgot my CD.  We’d packed halfheartedly, last minute.  Christmas had been cancelled until an hour before.  The cake wasn’t decorated, the cheeseboard still in the shop… and now we’d left Chris Rea behind.  As we sat in our quiet car, feeling poorly, we weren’t in the festive mood.  But suddenly the radio played our song.  Perfect timing.  Game-changer.  Four minutes of joy.  Later, as we pulled into my brightly lit childhood home, to be greeted with cuddles and besieged with excitement… we knew we’d made the right choice to ‘un-cancel’ Christmas.  Despite having the flu, we were now both eager for the festivities.

My December was quiet.  Still adjusting to life with over-sensitive lungs, and fatigued after the reduced activity of Autumn… I’d thinned my diary.  I looked after our besties’ children overnight (first time babysitting them both!), survived a noisy kids party, enjoyed a games afternoon with the nephews, and ate homemade soup with a lovely friend.  That was it.  But despite the slightly muted run-up to Christmas, I was excited about the big day.  The house was adorned with extra lights, the cake was half-brandy, and the cards written whilst watching ‘Elf’.  Due to my reactive lungs, I wore my mask a lot: wrapping presents, opening boxes, decorating the tree.  And Phil happily completed the most dusty and glittery Xmas jobs alone, whilst I hid! (putting up the tree, getting the decorations out of boxes, tinsel!).  Despite precautions, occasionally my breathing became aggravated, requiring extra steroid puffs, but luckily no ‘full blown tiny lungs’.  Normality was slowly returning.

And then eleven days before Christmas Phil became poorly.  It was the flu.  Real flu! 😛  There followed four days of high fever and exhaustion.  Shivers and sweats, sleeping all day, nausea, not eating.  His first serious illness since I developed PH; I was torn about what to do.  My head told me to restrict him to one room and avoid him! (Every year as a patient with an existing medical condition, I’m bombarded with scary warnings that ‘flu can kill’ me.  Gees!)  But obviously my bigger heart wanted to look after him. 🙂  So I became nurse whilst taking precautions: sleeping in the spare room, opening windows, washing hands- and thankfully I’d had the flu jab in October.  But a week before the big day the inevitable happened.  On the seventh day of Christmas my true love gave to me… the flu!

My illness was different -it went straight to my chest- coughing up gunk, fever, difficulty breathing.  Then strangely, a few days before Christmas I developed severe aching pains in my thighs.  By bedtime I was crying in pain, barely able to stand up.  The next day, the out-of-hours GP pulled and pushed and whacked hammers on my legs, before concluding that they weren’t working properly.  Too weak.  She calmly warned me that I might have an illness that results in paralysis.  Yep paralysis.  Fuck!  Cue tired, poorly, scared tears!  I spent the rest of the day asleep in a quiet side-room in the hospital Emergency Assessment Unit (EAU), whilst Phil -who was still suffering from flu-induced exhaustion- returned home to bed.  Every couple of hours a doctor would prod and poke, and get me to push and pull him with my legs and arms.  By now one of my arms wasn’t playing ball properly either.  They were concerned it was either Guillain-Barré syndrome, or inflammation of the spinal cord.  Both post-virus complications caused by taking steroids.  Both scary.  But amazingly, wonderfully, thankfully, when I awoke the next day, my legs and arm were much improved!  Hallelujah!  I could now kick away the doctor.  I could now walk across the room!  They tentatively concluded that the flu virus was the culprit.  Thank goodness.  I eventually returned home with antibiotics and tamiflu.  That was the 23rd of December. 🙂 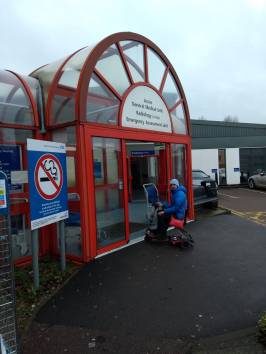 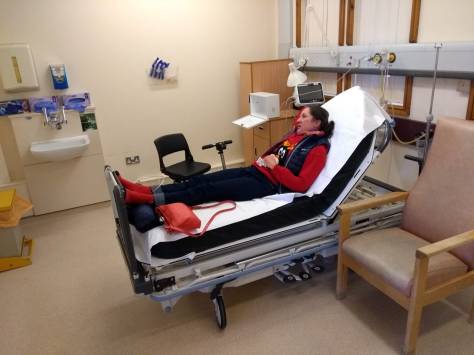 At that point we were still determined to go ‘home’ for Christmas.  Our house of poorly was depressing.  The past ten days had been completely unfestive, unjoyful, unhappy.  No mince pies or mulled wine or marzipan fruit.  No Christmas songs or town lights or carol singers.  Instead, we’d spent the run up to the big day drinking honey and lemon, eating Heinz tomato soup, and lying in silence on the sofa!  We needed to get away.  We needed to see happy people, eat real food and be looked after! 🙂  But then I reacted to the hospital medication!  Eight hours of vomiting and nausea.  Eight hours of sitting by the toilet.  Horrendous.  My worst reaction to antibiotics yet!  Advised to stop taking the pills, Phil spent Christmas Eve back at the hospital collecting alternatives.  By now I was exhausted.  I had limited energy coins, I couldn’t breathe properly, I couldn’t fathom how I’d survive the big day when so poorly.  And I didn’t want to infect others.  Christmas was cancelled!  Cancelled!  Well for about six hours! 😉  Thankfully, my wonderful family persuaded me to get into the car. 😀 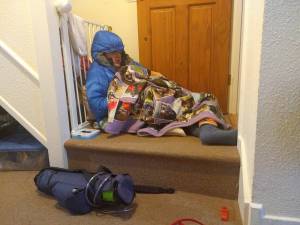 Going home for Christmas was exactly what I needed. 🙂  It was lovely.  Really lovely.  Surprisingly lovely.  Despite being ill, I had a magical time.  Christmas Eve night was pure excitement.  The traditional viewing of ‘Home Alone’, watching the nephews prepare their treats for Santa, stopping Lottie from eating said treats.  Christmas day was pure joy.  Gathering in the boys bedroom to watch them open their stockings, eating my sister’s traditional brekkie, gasping at the living room of presents.  Jacob literally jumped for joy at his tractor book, Luca squealed in excitement at his Lego sets, and Lottie sniffed all the presents looking for food.  For the first time ever, Christmas dinner was on time 😛 (well done Adam and Phil!)- so we even watched the Queen’s speech!  I joined in with charades and articulate… and my six year old nephew beat me at draughts!  And when it got dark, we watched our sky lanterns climb to the stars.  Boxing day was pure relaxation.  Constantly munching on leftovers, watching the boys (and men) construct their new toys, a sleepy film!  Perfect.

Mask on for the present opening! 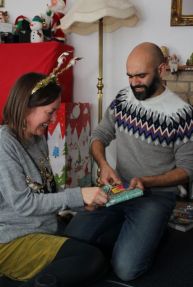 Luca beating me at draughts!

Jacob and the tractor book

Sister on the wine already! 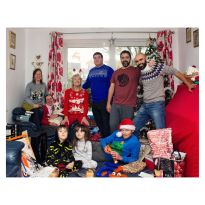 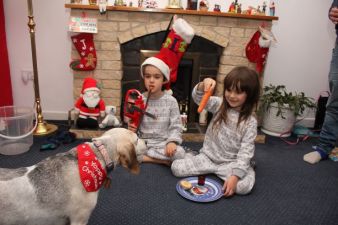 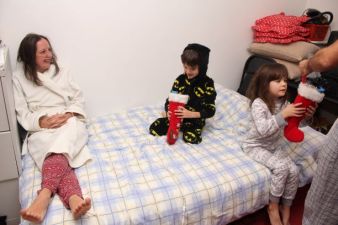 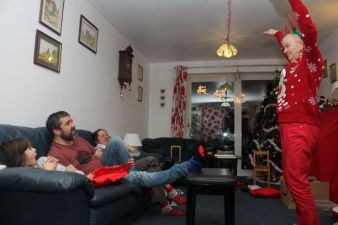 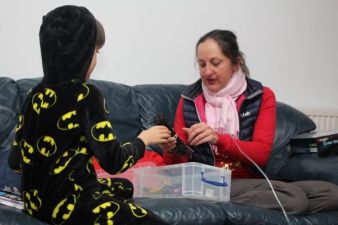 Jacob and his wire kit.

But yes I was ill.  Really ill.  My body had a rough and tough few days.  PH + PVOD + reactive lungs + flu!  I awoke on the big day to find my lungs struggling with every breathe, and sky-high fatigue.  It was physically a nightmare.  A ‘just survive it’ day.  But it was Christmas.  And I desperately wanted to watch it unfold.  So I pushed myself to join in: an hour downstairs watching the excitement, followed by an hour upstairs in bed.  I literally ignored the struggling breaths, ignored the low oxygen levels, ignored the anxiety that I was so unwell.  And it worked.  I managed to be there -watching from the sidelines- for all of the key events of the day.  And I loved it.  Yes it wasn’t quite the day I’d imagined when we first put up our tree… but it actually didn’t matter.  Only when I cancelled Christmas, did I remember that ‘life isn’t about waiting for the storm to pass, but about learning to dance in the rain’.  I was going to be ill on the 25th- but I could choose my response.  I could despair and call it off, as it wouldn’t be perfect… or I could adapt the day and enjoy it regardless.  So I choose to enjoy it.  And I did. 🙂

Being poorly also reminded me of what I love most about Christmas.  Yes I adore the pigs-in-blankets and sparkly lights and mountains of presents.  But it’s my family that makes the day.  The laughter, the love, and even the arguments!  Christmas is one of the rare occasions when we’re all living together.  We’re chatting, playing games, putting together new toys.  We’re joking about Rudolf socks, moaning about the broken oven, giggling until I can’t breathe.  These are the memories that I cherish from thirty-odd family Christmases.  And even though I was ill, by going home to be with them, I still got to experience all that.

I’m hoping that next year, on the seventh day of Christmas my true love brings to me seven swans-a-swimming.  And not the flu! 🙂