Seven years ago, Phil made the most spontaneous decision of his life.  He bought us tickets to watch England play cricket… in Australia… in three weeks time!  Although the night before we’d made a tentative (and drink fuelled) decision to spend a year travelling the world, we had no plans.  At all.  Now mere hours after that conversation, it seemed we were going backpacking for real… leaving in just a few weeks… with the Land of Oz as our first port of call.  I was mad!  But happily his most spontaneous decision also turned out to be one of his best!

What a game!  We were there in the stands of the enormous SCG, singing and cheering along England, on the day they won the Ashes for the first time on Australian soil in 24 years!  (For non-cricket fans, this was a big deal!).  The emotion and excitement, the ambience and atmosphere, the runs and result, concreted my love of the game.  We were spoilt for our first ever international cricket match!  So ever since, Phil and I have longed to see England play again. 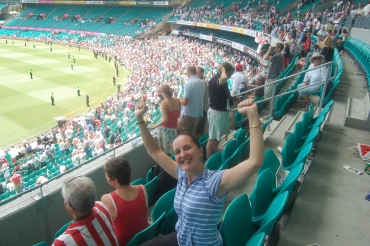 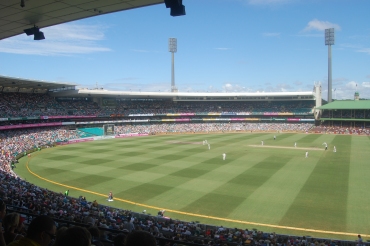 But fourteen months after returning from backpacking, I became ill with Pulmonary Hypertension, and so attending a match no longer seemed possible.  The singing and noise and excitement would be too energy zapping.  The hard chair and open stands and British weather would be too uncomfortable.  And the eight hour match plus travelling time would be far far too long for me to be out of the house.  So although I added it to my bucket list, whenever Phil mentioned going (which he did a lot), I declined.  Instead we listened to their matches on the the radio (the commentary is hilarious!).  However a few months ago, with my new determination to make memories and to try everything regardless of my illness, I booked us tickets.

So last week we went to Edgbaston, to watch the second day of England’s test match against the West Indies.  And to further the excitement, it was the first ever (and probably only 😉 ) day and night test match in the UK.  We watched them play with the new PINK ball!

We had such a great time.  It seemed surreal to be watching them live again.  We cheered as the West Indies get bowled out, then cheered louder as England scored runs.  We applauded Cook for scoring a double century, and flaunted our ‘four’ sign when the ball occasionally rolled over the boundary.  We decided the pink ball actually looked orange, and hurrahed when the floodlights were turned on.  And we ate constantly for eight hours- pakotas and scotch eggs and Parish Walk sausage sandwiches (luckily Phil packed an enormous picnic!).  And to top it all, England won the test match! 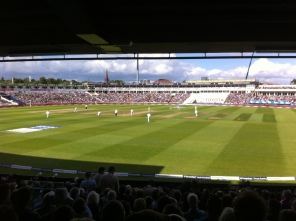 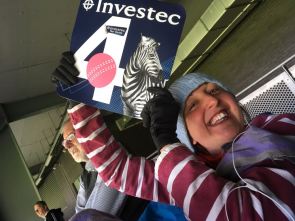 Wonderfully, the forecast bad weather stayed away until the evening!  Despite witnessing rain and hail on the journey to the ground, blue sky greeted the opening over.  Although it got cloudier and colder as the afternoon went on, the rain stayed away for nearly six hours.  Far longer than anyone expected!  However at 7.30pm, when the heavens suddenly opened, everyone in the stands ran manically for cover (we were dry!).  The match was cancelled, the car park flooded, and we had a very scary drive home on the motorway (more like December than August!).  So although we didn’t get to watch the match until the sleepy hours, we did get to witness the first ever test match under floodlights.  And with the wrong coloured ball!

Happily, Edgbaston Cricket Ground was well equipped for disabled visitors.  Blue badge parking had to be arranged and paid in advance, but was in a prime location, immediately adjacent to the entrance.  (We took the Bumblebee, so I had a lie down, and Phil made cuppas in the break!).  Since I’m unable to attend alone, Phil’s admission was free as my carer.  We got two tickets for £26!  Disabled toilets were dotted throughout, and lifts were large enough for scooters.  A friendly greeter directed us to our seats, and staff volunteered to walk ahead of my scooter to help me manoeuvre through the crowds.  And bizarrely, the security people let me bypass the usual body search and bag check… even though I was carrying a canister of gas! 😛  The views from the disabled area were fabulous!  A prime spot behind the stumps!  We were sheltered from the weather (but also the sun… I ended up wearing my winter coat and hat in August!).  As the allocated seats in the disabled area were hard and without arm rests, I was allowed to bring my own.  (I’m currently struggling to support my body when sitting upright for longer than fifteen minutes, so need a chair which completely cocoons, thus requires minimal effort to sit upright).  Happily there was more than enough room for my large chair, mobility scooter and multiple bags of picnic and clothes!

However there is one small downside to having a separate area for the disabled… we were away from the rest of the fans.  Away from the atmosphere.  Away from the singing and the inflatable ball throwing and the fancy dress!  Away from the chanting and the Mexican waves and the beer snakes.  Although we sang as loud as we could, we missed sitting with the Barmy Army (At one point, Phil disappeared to the party stand for an hour!).  Although I truly appreciate the accessible area -I’d have been unable to attend in ‘normal’ seats- it is a constant reminder that I’m different.  I’m segregated and separated.  Although difficult to implement, I’d love accessible seats dotted throughout every stand.  I’d love disabled people to have the same choice as everyone else on where to sit in the grounds.  I’d love to feel the same, part of the crowd, normal, included.  I might now have PH… but I still want to sit next to Batman and hit a giant beach ball! 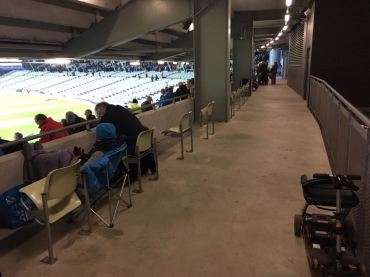 The disabled area (there were more people there!) 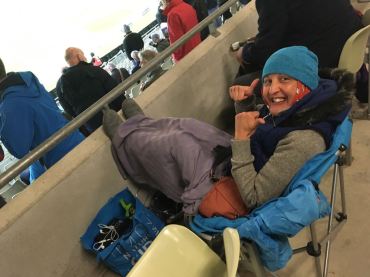 Wrapped up in my moon chair!

So I survived my first cricket match since being ill.  I survived a day and night watching the pink ball.  I survived ten hours out of the house!  Amazing!  Even more impressively, I did so, despite being quite unwell.  I’ve had a difficult six weeks, and sadly have been quite limited in what I can do.  But my wonderful body, fuelled by determination, adrenaline, a sneaky nap, and sausages ( 😉 ), allowed me to stay until the rain fell.  Actually in some ways, cricket suits PHers.  It is such a sedentary game, that I was able to conserve my energy for most of the time, only needing to sing and cheer periodically.  For the majority, I watched peacefully and quietly, nestled in my moon chair.  As if I was at home on the sofa, with the cricket on the television!  😛

England are playing the Ashes in Australia this coming January.  I think I need to hide the credit card from Phil, before he forgets I can’t fly, and spontaneously buys us tickets again!

One thought on “Surviving The Pink Ball”