I’ve been awake since 5am thinking about today.  It’s a big one in my diary.  For the past week, I’ve been counting down the sleeps, eagerly making plans with Phil, and telling everyone I see.  I even dreamed about it last night!  Today is ‘Clumps Day’ in our house. 😀  After seven years of illness, after seven years of craving the countryside, after seven years of missing out on muddy dog walks… today I’m getting my own off-road scooter! Wahooooo! 🙂  And our first trip will be to Phil and Lottie’s favourite spot- ‘The Clumps’!  At last I get to join them on their adventures!

Phil and I live in a beautiful, small village in South Northamptonshire.  We love it here.  It’s the epitome of rural England, with its Cotswold stone houses, 17th century thatched pub, and tractors trundling through the main street.  We’re immediately surrounded by farmland and woods and meadows.  Fields of crops and mud and long grass, stretch for miles around us.  Joined together by a network of well-used rutted footpaths.  There’s an ancient wood with logs to scramble over, and troughs to run in and out.  There’s a hill to sledge down, meadows full of wildflowers, and a couple of rickety bridges over streams.  There’s a large pond full of geese and swans, and there’s even the remains of an iron-age fort!  We’re surrounded by beautiful English countryside.  It’s perfect for us.  For the first six months of living here, Phil and I loved traipsing through the mud as we explored.  However, shortly after I developed Pulmonary Hypertension, and suddenly those same fields became inaccessible to me.  Overnight, my local countryside became largely unreachable, impassable, off-limits. 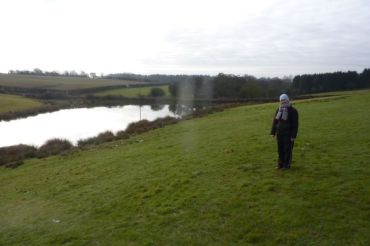 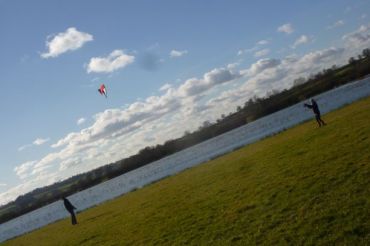 For the past seven years, Lottie and Phil have continued to explore every nook and cranny within a few miles radius of our home… without me.  Between them, every footpath has been run down, every stile has been clambered over (or lifted over if you have four paws), and every mole hole studiously sniffed.  At least once a day, they disappear together; returning with stories and photos and videos.  Clips of Lottie following a scent, splashing through a puddle, running madly.  Photos of scampering deer, glorious wildflowers, red kites soaring.  Or tales of watching badgers, finding fallen trees, being chased by bulls.  They love their adventures, particularly to their favourite bumpy spot- ‘The Clumps’.  Although I love to see them return with muddy paws and muddy boots and waggy tails… it also makes me a little sad that I’ve missed out again.  Yet again.

We have tried to get me into the local wilderness.  We’ve pushed my wonderful little scooter to its limits; but mud or battery or incline or camber always forces me to stop.  Consequently family dog walks are restricted to hard path and road- just two routes that we alternate.  Mud always trumps concrete for Lottie though… she tries to pull me into every field we walk by! 😉 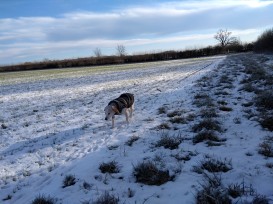 But even though I love and miss the countryside, for years I didn’t want an off-road scooter.  Initially I lacked the strength and stamina needed to tackle muddy fields, so was perfectly content to stick to solid paths.  Later when I grew stronger and more adventurous, I was disappointed with the off-road scooters available.  They were amazing at traversing grass and mud and hills and rugged tracks (in fact, I cried with happiness the first time I tried one 🙂 ).  BUT I hated the look of them.  The few models on offer were all big and bulky and heavy.  Tanks.  They screamed ‘disabled person’, they screamed ‘different’, they screamed ‘look at me’.  And they needed a big inconvenient trailer to be transported.  So I didn’t want one.  Therefore in a kind of ‘cut off your nose to spite your face’ way, I refused to have one.  They were also pretty expensive, which helped justify my decision.  As time passed, my want for wilderness, exceeded my dislike of monster tanks.  I kinda wanted one now.  But then I was put on the transplant list, and it seemed pointless as we assumed I’d have new lungs within months.  Later when they paused me on the active list, I still couldn’t decide.  The price versus how long I’d own it for.  I’ve been umming and ahing about getting one for years now. 🙂

Then last month I finally agreed. 🙂  Phil wanted to buy me one for my approaching 40th birthday.  So we’ve been watching videos, reading reviews… and even test-drove a few models.  It was brilliant fun pushing them to their limits; though sometimes to the panic of the salesman! 😉  Off-roading when disabled must be niche though, as there are very few models available.  Some hardcore scooters are capable of clambering over big boulders and up very steep inclines.  But we couldn’t justify paying £17k, just to reach a mountain summit once a year.  So we picked a substantially cheaper one that would be perfect for us 99% of the time- The TGA Vita X!  It felt the nicest to drive… and looks cooler than its compatriots. 😛  Less tank, more quad bike.  Less disabled person, more adventurer.  Less dog walks on roads, more muddy paths! 🙂

So today is a special day in my world.  I finally get to join in the adventures, traipse through the mud, and see the bumpy Clumps.  And when Lottie tries to pull me into a field, I finally get to follow her!  Happy Clumps Day! 😀

One thought on “The Clumps Day”