I hated French at school.  Shy and unconfident; I’d slide down my seat, and hope the teacher would ignore me.  It was full of words that I couldn’t remember, and grammar that I couldn’t understand.  And it seemed so pointless.  My grumpy teenage self couldn’t fathom why I’d ever need to ask for directions to the nearest swimming pool, or why I’d want to tell someone I was from a little village near to Leicester!  I’d never visited France, nor had any intention to.  Fast forward twenty-odd years and now I LOVE our neighbouring land of croissants.  J’aime la France!  Since becoming ill with Pulmonary Hypertension, that land across the English Channel has become a very special place to Phil and I.

Although we’d both visited France as students, we only fell in love with it when I became ill.  Our first trip came five months after I’d initially collapsed.  My health was awful- weak and fatigued and weak and fatigued; I barely left the sofa.  In the middle of hospital test hell, yet far from a diagnosis- we desperately needed a holiday to escape.  With 99% of the world suddenly out of reach due to my illness, it was one of very few places we could still go to.  I’m still amazed I made it that first time.  Anxiety had floored me since getting poorly; I’d often be frozen with nerves when forced to leave our house.  Although I was coming out the other side, crossing the sea to a foreign land whilst so unwell was a big deal for me.  An enormous deal.  It took a lot of bravery to agree to go.  But I did.  A midnight ferry and a long long drive later, we arrived at our gite in St Lo.  The holiday was a far cry from any we’d been on before. I could only leave the house for a few hours, I was in a wheelchair, I refused to be left alone.  It was hard to go from manically travelling the world the year prior, to a quiet gite retreat.  However, over the week, we gradually began to accept that this would be how we holidayed in future, we gradually adapted to the new situation.  And although there were difficulties and frustrations and sadness, they were far outweighed by the more wonderful moments.  We found that we adored France.  Buying croissants each morning, traditional stone farmhouses, drinking coffee in street-side cafes.  Grand elaborate chateaus, conversing in French in shops, mouth-watering soft cheese.  In retrospect, that first holiday was a significant milestone for us.  The first time we chose to carry on living life since that scary day when I collapsed.  The first time we un-paused our lives, and chose to move forward… illness and all.  It helped us start to heal.

So the following summer we returned, but to a different part of the country; this time with an actual diagnosis (PH) and the newest member of our family, Lottie Pie.  The year after that my siblings and nephews joined us for a truly awesome trip.  With each visit, I felt more confident and relaxed to be abroad with such a serious and disabling illness.  France was, and is, the place that allows us to still feel like we’re having an adventure, still ‘living life’.  A different language, driving on the wrong side of the road, unusual delicacies.  It is the place that allows us to replicate in a teeny tiny way our previous life of exploring the globe.  So it’s incredibly special to us.  Plus what’s not to love about a country that champions eating cakes for breakfast! 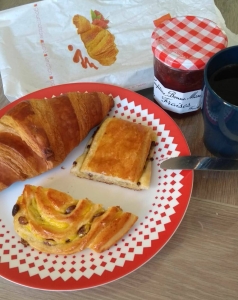 So we were a little sad when we were suddenly unable to visit France as well.  For nineteen months I was on the transplant list and restricted from travelling more than four hours from London.  We particularly missed it when watching the Tour de France!  My thoughtful brother once brought us a bag full of smelly french cheese after a cross Channel trip.  If we couldn’t go to France, then France would come to us! 🙂

So we immediately planned a return when I was suspended from the transplant list… but I was too nervous to book.  It would be my first trip with a diagnosis of terminal PVOD, as an oxygen user, and with poorly functioning lungs.  Would I deteriorate and be too ill to go?  Would the long journey destroy me?  Would I run out of oxygen?  How would I describe PH to French paramedics?  But I eventually pulled on my brave face and booked. 🙂 To address my worries, we splashed out on a ferry (and cabin) to Cherbourg instead of Calais, booked a gite only 30 minutes from the port, took my NHS concentrator and an excessive number of back-up canisters… and had my french speaking friend on stand-by for any emergency hospital conversations!  We were ready!  HOWEVER a week before departure, we nearly cancelled!  My lungs reacted badly to a pesky candle; completely disabling me for days with severe horrid breathlessness.  But amazingly, wonderfully, thankfully I recovered in time to set sail.

It was a brilliant holiday.  I loved it. 🙂 Scarily my lungs struggled again soon after arriving; they felt tiny.  Luckily no conversations with french paramedics were needed, and I just had to spend the first 36 hours lying down attached to oxygen.  Thankfully, by Monday my breathing had started to normalize, so I could explore.  There were daily dog walks along the empty promenades and beautiful harbour fronts of the local villages.  There was toe-burying and waves jumping along the miles of sandy beaches.  We loved discovering random French delicacies from the local shops (lavender salt anyone?) and choosing locally caught fish for dinner each night.  There were restaurant lunches, early evening drinks in tabacs, and shiny patisserie cakes.  There were two big lighthouses, a strange biscuit factory and a misty river.  And as I could only cope with a few hours of exploring each afternoon, Phil enjoyed bike rides and runs every morning, whilst I lazed about reading in the sun.  One magnificent day we discovered an amazing coastal road.  Isolated and wild; the views were stunning.  We spent hours driving along, pulling in to explore the deserted coves and wind-swept beaches.  Absolute bliss.  The weather was surprisingly amazing all week; blue skies and gleaming sun in October!  And the food was even better.  Platters of creamy cheese, fresh pain aux raisins for brekkie, Camembert infused moules frites.  Sweet crepes, conger eel, over-filled baguettes.  It was wonderful to be back in France again. 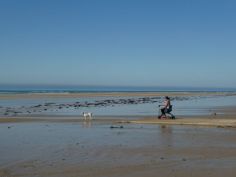 Scootering on a deserted beach…

A drink in our village 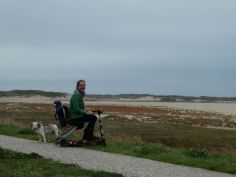 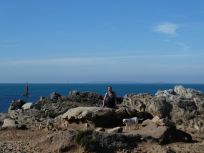 The Pie posing at the most northern point

Being chased by waves on my scooter 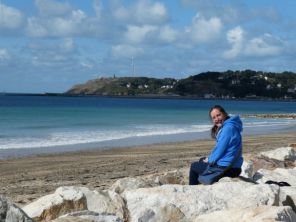 Phil on a bike ride 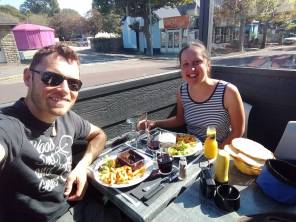 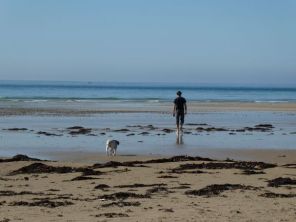 Phil and Lottie heading for the waves

After three years away, we finally made it to France again.  My teenage grumpy self might have had no idea that the land of croissants would become such a special place for me, but I did foresee one thing… I’ve still never needed to ask anyone where the local swimming pool is!

2 thoughts on “I Made It To France Again!”