Throughout these past few months, the latter half of summer, a little fear has niggled away at the back of my mind. For the majority of time it has remained hidden, forgotten; I rarely worry about the future. But it has popped up at every recent recovery day. Opening my eyes -feeling sick after a previous day of activity- I always find the fear waiting. “Wake up, check out your body, is today the day?”. For the next few hours, it sits on my shoulder, reminding me of last year, drawing parallels, questioning any improvement. Only with regained strength and health does it depart with a sigh of relief. Last summer was a shocker as I randomly deteriorated half way through… and without explanation. So this year, as the days and weeks of the sunniest season have passed, I’ve kinda been expecting it to happen again. An action replay of 2017. Another summer of two halves.

Last year the decline started at the end of July (read the blog). I struggled to bounce back from a fabulous, but exhausting, weekend away camping with friends. Instead of returning to my normal after 48 hours of doing absolutely nothing, I didn’t get any better. I was still weak and breathless, exhausted and symptomatic… as if this was recovery day one, not many recovery days later. One week passed without improvement, many weeks passed without improvement. For three long months, I was stuck on ill. Although there were occasions where I miraculously mustered together enough energy to enjoy a few hours of fun away from the house, for the majority of August and September and October I was lying on my back. It became the summer of the sofa. Doctors couldn’t explain it, I couldn’t explain it… I’d once again just randomly deteriorated.

Although unexplained blips are a feature of my illness, can’t be prevented, are just ‘one of those things’… in retrospect, I didn’t help the situation. I didn’t give my body the best chance to cope or fight or deal with the (as yet) unidentified problem. Last summer I was on a strict diet to lose some pesky ‘steroid’ weight (800 calories daily), and also kept myself very busy with a filled diary. Maybe I under-fueled or over-did it? Neither are ideal when also dealing with serious lung problems. My wonderful body struggles to keep me alive day to day… creating extra difficulties makes this many times harder.

So this summer I made changes to give my body the best chance of surviving an action replay. By eating my correct maintenance level of 1350 calories each day… I fueled my body better (I ate the equivalent of two extra Mars bar each day compared to last year! 😛 ). By having a complete weekend off each month, reducing the number of mid-week trips, and setting myself time limits for daily active jobs… I rested more. At times it required great willpower: reading instead of weeding, watching a film instead of going on a day trip. At times it was frustrating: turning down visitors to spend a weekend resting, or using my allocated weekly energy allowance on a hospital check-up. And I’m sure I annoyed a few friends by declaring that I couldn’t see them as my diary was full 😛 (but with a forced weekend off, I could only do three ‘big things’ each month)! However all the changes were worth it, as the plan worked. Whatever happened last year, didn’t happen this. I’ve stayed well and able for the whole of the summer. No random decline, no unexplained deterioration, no weeks and weeks on the sofa. And by not continually pushing my body to the extreme, I’ve felt better. Less on the edge, more in control.

And what a fabulous latter half of summer it was. Despite my fear, it was a brilliant August and September. I stayed at a quirky campsite in Suffolk, with old school friends: we ate extravagant burgers under moonlight, and bacon brekkie baps under umbrellas! I stayed at a riverside campsite in Hampshire with some uni friends: we wandered the country lanes searching (unsuccessfully) for a swimming lake, and little Agnes cooked us plenty of grass cakes. There was a great day spent exploring the grounds of Waddesdon Manor with my Mum, and a fun trip marveling at dinosaurs and dodos with our besties. We celebrated Phil’s birthday by watching England beat India under the scorching sun… and celebrated mine with afternoon tea in Oxford. And I even got to watch two of my heroes zooming by really quickly, when the Tour of Britain went through our local country park. There were meals out, pub garden trips and some lovely dog walks around our village. There were BBQs, G&Ts and lunches in the garden. There were hours of gardening (see the blog) and photobook creating. There was a tiring visit to the transplant team at Harefield Hospital (all’s good so I’m still suspended off the list!) and a gynecology consultation in Oxford. And on my forced rest days I watched hours of cycling on the TV, and read and read and read! It was a wonderful latter half of summer!

Baby Alex in the Bumblebee

Can you spot me on my chair? 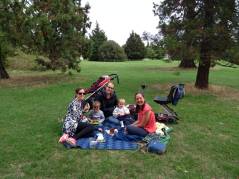 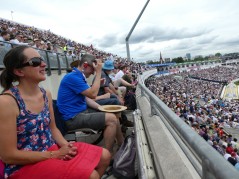 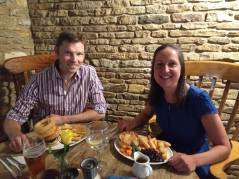 Picnic at Waddesdon Manor with my Mum

First BBQ on our new patio

Lottie chilling in the sunshine!

Agnes and Baby Leo in the Bumblebee 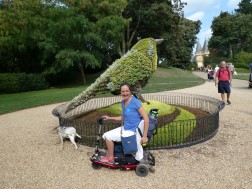 Introducing Nate and Soraia to the dinosaurs

It makes me a little tearful to look back through photos of the past few months of sun. Two and a half years after my PVOD diagnosis, I am not only still alive, but doing better than ever. Two years after initially being put on the transplant list, I’m not only surviving with my old lungs, but am able to do much more. Even with forced rest, both halves of summer were jam packed with activity and fun and love. So many happy memories. Thank you wonderful body for coping. Thank you for letting me have my best ever PH summer.

I was nervous that it would be another summer of two halves… but actually it turned out to be my strongest sunniest season yet. I’m hoping that my little niggling worry waves goodbye now…