Pulmonary Hypertension is a very rare condition, which unfortunately means that despite great advances in the last 20 years, there is still a lot that is unknown about the disease.  Having spent a couple of days at the Royal Brompton Hospital this week, and having completed lots of tests for them, I am still not sure of the plan of action, as they seem to have made some discoveries which are quite puzzling!

Going back to a place where you’ve had a difficult experience, is always going to be scary.  Everywhere in the hospital has a memory- the bed where I spent many a terrified day, the corridor where I had to practice walking up and down, the toilet where I got locked in and had to be rescued, the stairs I walked up for the first time.  Seeing all of the places again last week was really unnerving as I was reminded of memories I hadn’t thought of in a while.  I found it quite alarming seeing all the very ill people; I had to control the urge to run out again as I don’t want to belong to this ill-person’s world!  However having seen it the week before, and having faced the fear of it then, I was surprisingly relaxed about returning this week.  Furthermore, all the logistics of our visit were already organised; our plans for Lottie the dog, and Phil, were just put back another week, and the suitcase had remained packed from before.  Therefore the visit was preceded by a lovely calm week of watching films and making photobooks, all whilst cuddling Lottie.

On arrival it transpired that the hospital was full again, and the lady whose bed I was going to have, was now not going to be discharged.  I was a little worried that we’d be sent home again.  However after 6 hours of waiting, they were able to discharge a patient so could accommodate me after all.  I was really pleased to find my bed was in a different ward to my previous stay (yay no bad memories) and also.. I was giving my own room.  Yes my own side room!  After the busyness of the day room, I was very happy to be able to close my door and have complete peace!  No beeping of machines, no nurses or visitors talking, no patients snoring.  Just absolute quiet, calming peace, bliss.  Now I’ve been spoilt; I’m always going to want one in the future.  On my first ever hospital stay in Banbury, I’d also been given a side room.  In the night, an elderly confused gentleman came waltzing in to my room, minus his underwear.  It frightened the life out of me- Phil came driving straight up to the hospital, broke in to the ward, and spent the rest of the night asleep on the chair in my room, in case we had any more unwelcome visitors!  So remembering that previous experience, I was a bit of a wuss this time, and slept with the light on! 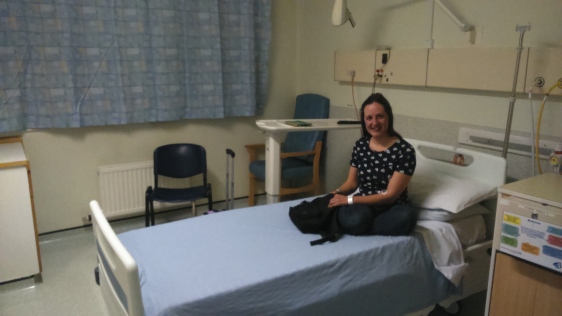 My own quiet room! 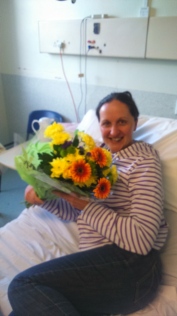 Flowers from my in-laws!

The Royal Brompton is an old Victorian hospital, and surprisingly it has the worlds hottest radiators…. it is always boiling hot inside the wards!  Since getting ill I am always cold, and so wrap myself in layers of clothes and have small fan heaters dotted around my house, which are used throughout the day whenever I need a little warm up.  After my previous stay, I knew to take lighter clothes so I wouldn’t overheat, and to leave my portable heater at home.  Unfortunately I hadn’t considered that I might be placed in the only side room with a broken radiator!  The nurses piled the extra blankets on my bed -5 in total, and I took to wearing my hat and coat inside!  However at one point in the morning, I got so cold, it was making my breathing worse.  The nurse took one look at me, then ran and grabbed lots of blankets to wrap me in.  She then spent ten whole minutes rubbing me to make me warmer!  Nurses are always so kind and look after you so well.  Her rubbing did warm me up, and gradually colour came back in to my fingers and my breathing got a lot better.  From now on, I shall always pack my portable heater, just in case!

Well they certainly gave me a full check up.  Over the course of the two days I completed an exhausting amount of tests!  Some tests were routine: – I had lots of blood taken, ECG’s, and MRSA swabs (nose, throat, armpit and groin); – and my blood pressure, temperature and oxygen saturation was monitored every few hours.  However more importantly I had a number of specialist tests at different times dotted around the hospital.  I wasn’t allowed to use my scooter, and was instead pushed around in a wheelchair by porters.  A couple of the tests took place in the hospital’s adjoining site (Fulham Road), so I was chauffeured in an ambulance and escorted around.  So many people help to make the hospital system work.

On the first day I had an Echo-cardiogram and a Bubble Echo-cardiogram.  The former is basically an ultrasound of the heart, and I have them regularly as it allows the doctors to look closely at my heart (to take measurements of it, check it is pumping efficiently, observe if the valves are leaking etc).  They smoother your chest in a very cold gel, and then make you lie on your side or back, with your arms above your head, whilst they hold the probe at different places.  The pleasantness of the Echo test is definitely determined by the doctor doing it.  Most are quite experienced and so it just causes discomfort.  However occasionally you’ll get one who digs in really hard, which really hurts, and you spend the whole time watching the clock and trying to be brave!  Luckily this time I had a non-heavy handed one, and I enjoyed watching the heart on the little screen, even if I wasn’t too sure what I was seeing!  Afterwards, a second doctor came in and injected a saline solution with bubbles in it, in to my vein.  Using the ultrasound, we could watch the bubbles enter my heart on the screen, and then get pumped through the heart on the way to the lungs.  However rather strangely, they then returned and were seen in the other side of the heart 5 seconds later!  Apparently this is not supposed to happen, not even for PH people.

After an ok night’s sleep (I shouldn’t have kept the light on, it kept waking me up!), and a small breakfast (I remembered to take my marmite to the hospital), I was picked up for my next test- a Computerised Tomography (CT) scan.  This is really quick and easy, I spent longer driving to it than the actual test took!  You just have to lie down on a platform, which then moves you in and out of a giant polo mint.  The machine is surprisingly noisy, which is a little unnerving, but it is over quite quickly.  The hardest part is trying to hold your breath for the whole time that the xrays are being taken!

Straight from there I was taken for some Lung Function Tests, which are really hard work.  They required me to blow in to a tube in different ways, so they could measure how well my lungs are working.  The doctor would explain how I had to breathe and then I had to try and remember what to do, which was tricky.  Amusingly the doctors are pretty hard task masters, and keep pushing you to do the best you possibly can: “keep going.. going.. push it all out.. don’t stop… keep pushing it out!”.  I’ve learnt from previous experience that it is best to try your hardest from the start, or else they’ll keep cracking the whip until they’re satisfied you’ve given it your best shot!  It is quite claustrophobic having a nose clip on and breathing only in to a tube.  Most of the time your gut instinct is to rip it off and take a big breath of air… however if you do that, then you just have to repeat the whole task until you’re able to do it!

After a tiring morning of tests, a late lunch (a giant pasty), a chat with my lovely consultant and PH nurses, and a visit from my husband and our friend Ally… I was desperate for a sleep.  However I had to go to my final- and most exhausting test!  Imagine being wired up with ECGs and different monitors, having a mask put over your face so you can only breathe out of a tube, and then made to walk on a treadmill!  When you have PH this is not fun.  Phil, however, was desperate for a go!  Then after you’ve been walking for three minutes on the treadmill… it suddenly gets FASTER and STEEPER!  Nightmare!  The whole time the doctors are encouraging you to “Keep going, don’t stop, go as far as you can go”.  After about 5 minutes I had to stop as I was gasping for air, and even then I had to keep my mask on!  It was lovely when I could take everything off afterwards. 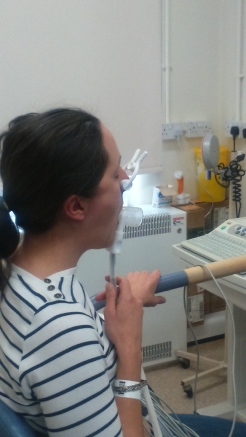 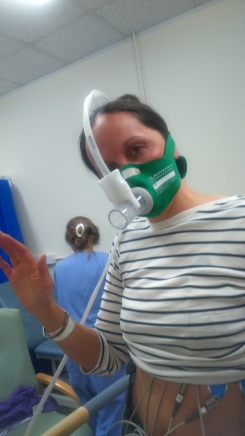 Hello from the mask! 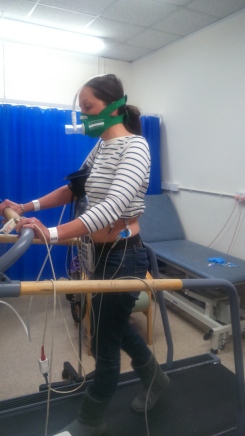 Trying to walk on the treadmill!

I was in hospital on the day of the doctors strike.  Interestingly as it is a specialist hospital, the hospital seemed to be carrying on without much disruption, as the majority of doctors are apparently fellows or consultants.  I did have a chat about the strike with a junior doctor on the first day, which was really interesting as she passionately believes that the new contract will have detrimental consequences.  I don’t know enough about the proposed changes, I just hope so much that this is not going to be the start of the end of the NHS we all love.  Anyone who has experience of being ill, will always rave about the amazing doctors we have working with us, and it saddens me to think that this could ever change.  Funnily, with the junior doctors away, I was able to be discharged really quickly, as I didn’t need to hang around and wait for them to write my discharge letter.  Instead it will be posted later.

So I went in to hospital to work out what medication to try next.  However after lots of tests, it appears that my visit has not yet answered that question and has in fact just brought more questions to the forefront.  My consultant is worried by the low oxygen levels in my blood.  Some of the tests seem to suggest that there may be a shunt in my lungs, or an abnormal connection that means some blood is bypassing the lungs.  It may also be that the oxygen transfer from lungs to blood is not happening as efficiently as it should.  Apparently it is a puzzle!  Anyway all of the Brompton PH consultants and doctors were looking at my test results on Friday, and coming up with a plan of action for me.  So I’m hoping that they’ll be ringing me tomorrow, and I’ll then have a better understanding of these latest test results and an idea of the way forward.  It feels a little like waiting for your exam results; they may have some awful news for me, or maybe they’ll have a great plan.  I can only hope and cross my fingers that it is the later.

7 thoughts on “Tests at the Brompton”